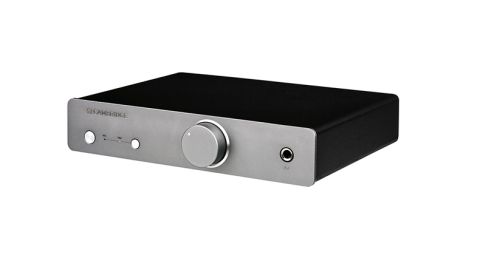 Producing any five-star duo requires complementing talents, different enough to validate the inclusion of both parties while similar enough to form a cohesive whole.

The Duo referred to in the name of Cambridge's latest phono stage – released alongside the moving-magnet-only Solo pre-amp – would seem to refer to its ability to handle both MM and MC turntable cartridges.

But it could perhaps indicate the Duo’s inclusion of an on-board headphone amplifier, for use in either a traditional hi-fi system or solely as middleman between your deck and a suitably talented pair of cans.

Or - as we’re about to find out - maybe it refers to that so-often-elusive relationship between striking design and sumptuous sonic performance.

Few phono stages at this price offer such a sophisticated visual statement.

From the offset volume dial dominating the Duo’s otherwise minimalist fascia to the smaller, intuitive tics such as mirrored labelling on its rear (allowing for the easiest of connections whether looking face-on or peering over the top of its chassis), the Cambridge is a more intetesting looker than most.

It’s not short of connections or features either. There’s a 6.3mm headphone socket and buttons for power and cartridge options straddling the substantial dial, with MM and MC ins and single-ended outs and a small balance level on the back.

Cambridge has also paid attention to the little things in terms of the Duo’s running and performance.

A subsonic filter is there to help eliminate low-frequency rumbles, while its auto power-down after 20 minutes of inactivity, and 0.5W power requirement when on standby, keeps power consumption to a reasonable minimum.

Good intentions do not a five-star review make, of course, but such attention to detail is sometimes indicative of a honed sonic performance. So it is with some anticipation we hook the Duo up to our reference system and shuffle our first record from its sleeve.

Our confidence is repaid during the eponymous opening track of The Blue Nile’s A Walk Across the Rooftops. It’s a detailed, dynamic performer that doesn’t shy from the warmth of the record - but nor does it wallow or warble in it either.

Pizzicato strings are buoyant, the bass guitar stabs with sufficient weight and agility, and the snare cuts through with reverb allowed to decay in its own time.

The presentation is spacious but cohesive, offering three-dimensionality while hanging its image front and centre.

While the Duo doesn’t quite match the punch delivered by Rega’s Award-winning Fono MM MK3, it doesn’t lack bite either.

More driven tracks on the album, such as Stay or Tinseltown in the Rain are delivered with verve, though the Cambridge’s smoothness and warmth come into their own with its opulent performance of the more sentimental, inward-looking Easter Parade.

This kind of sonic glow is one reason you might opt for this phono stage over its class-leading counterpart.

It flourishes under these kinds of conditions, offering similar levels of detail, timing and dynamics but with a fuller body and perhaps more fulsome presentation.

That isn’t to understate its compatibility with both moving magnet and moving coil cartridges nor, more importantly as far as we’re concerned, its in-built headphone amp.

Those additions make the Duo a unique five-star prospect at this price, and ought to earn it a reasonable amount of admirers regardless of its charming sonic character.

Rarely does Cambridge fire too wide of the mark, but the Duo hits right at the centre of the target.

It's a well-specified, full-bodied, dynamic performer, as classy as a matinée idol in a smoking jacket. You really can’t go wrong.