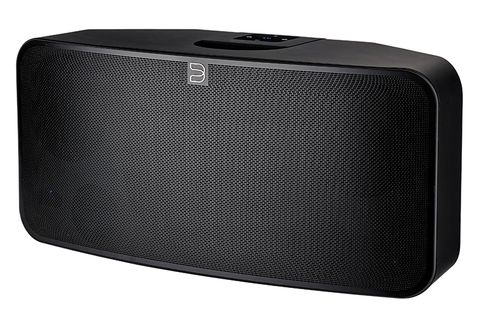 A big, bold and expressive speaker that’ll fill even the biggest rooms with its rich, engaging sound

When Bluesound refreshed its multi-room line-up late last year, its biggest wireless speaker, the Pulse, was the only one not to get a second-generation makeover.

That has changed with the arrival of the Pulse 2, the new head of the Bluesound family, which features all the internal changes introduced elsewhere in the range.

This means the addition of optical and analogue inputs for playing digital and legacy sources throughout the house, a dedicated headphone output, a higher-power USB input for powering any hard-drive and a new wi-fi chipset to ensure a faster, more stable wireless connection.

There’s also aptX Bluetooth on board (previously you had to use a dongle), plus a more powerful ARM 9 processor that means library indexing and playback should up to 20 per cent faster. It has helped to halve the Pulse’s power consumption too.

Finally there’s an IR sensor built into the front panel for controlling playback from an external source using the device’s remote – handy for using the Pulse 2 to give your TV sound a boost, for example.

A whole bunch of functionality and usability upgrades then, but elsewhere it’s business as usual. The Pulse 2 is the same size as its predecessor, which means it needs a decent sized surface to call home, and also requires a little space to breathe.

The fingerprint-harbouring glossy finish has been ditched for a matte one, but the Pulse 2 packs the same touch-control panel and speaker arrangement as before, with two 7cm drivers and a 13cm woofer, all individually amplified for up to 80W of power.

A big improvement to the Bluesound experience is the updated app, with some much-needed improvements to design and usability. This includes a sleeker user interface, improved menus and navigation, more intuitive speaker grouping and easy-to-follow set-up guides.

It still can’t quite match up to Sonos for functionality and ease of use, but it’s a big step in the right direction.

As for performance, the Pulse 2 takes plenty of character from its powerful predecessor. We don’t need to lift the volume much past halfway for it to fill our testing room with its rich, full-bodied sound. You’re going to need a pretty big room to get the most from the scale on offer here.

The deep bass response that was so prominent is back too, though much better controlled. It’ll still be too much for more neutral tastes, but it manages to be more articulate this time round.

It does go impressively deep, giving it real solidity and authority. There’s decent precision here too, meaning the Pulse times much better than you might expect from something with so much bass.

Play Cornfield Chase from Interstellar OST by Hans Zimmer and it shows just how rhythmic it is, demonstrating a lightfootedness that keeps a tight grip on the fast-paced organ pattern, something that by comparison, the Sonos Play:5 doesn’t quite make as much sense of.

It also highlights the Pulse 2’s better sense of space, compared to its multi-room competitor, layering the instruments so they each have their own space and character in the presentation.

Dynamically it’s talented too. Play Ultralight Beam by Kanye West and the bass lines kick with real force and impact. When the choir joins Kanye’s vocal, there’s an almost tangible uplift in excitement, and the differences between loud, soft and every level in between are articulated with expression and finesse.

It does suffer from a slight lack of refinement compared to the Sonos Play: 5 though, mostly due to a hint of coarseness in the upper mids and treble. This is particularly noticeable at high volume, and given that this speaker is just begging to be turned up, it’s something we wish had been given a little more attention.

There’s a good level of detail throughout the frequency range, though the midrange could have been positioned a little further forward in the presentation, as it’s a touch too recessed for our taste. It means vocals aren’t as clear as they are on the more forward Play:5, struggling to push through a rather rich mix to be heard with as much transparency.

Of course, a big sell of the Bluesound range is its support for files up to 24-bit/192kHz. Stream a hi-res download of The Chain by Fleetwood Mac and the Pulse 2’s big, bold character remains, and if possible, is even more surefooted.

It’s an enthusiastic performance with plenty of insight, and you’ll hear more subtlety to instruments and even more articulation behind big dynamic shifts. We’d still like a more refined treble and better clarity through the midrange though.

But these niggles don’t affect what is an altogether engaging and entertaining performance, with a sound that could fill a room much bigger than most will ever need. It’s solidly featured for its price too, and the new app only helps to make the user experience a more enjoyable one.

While similar functionality to the biggest of the Sonos family means the comparison makes sense, there is actually a £180 price difference between them, with the Pulse 2 a rather hefty £600. The gains you get in improved dynamics, timing, feature set and detail levels go a long way to bridging this gap, especially if you take advantage of the hi-res music support.

The Pulse Mini may still be the smarter choice for a lot of rooms, but if you want the biggest, boldest sound in the Bluesound family, the Pulse 2 should be a keen contender for your audition list.