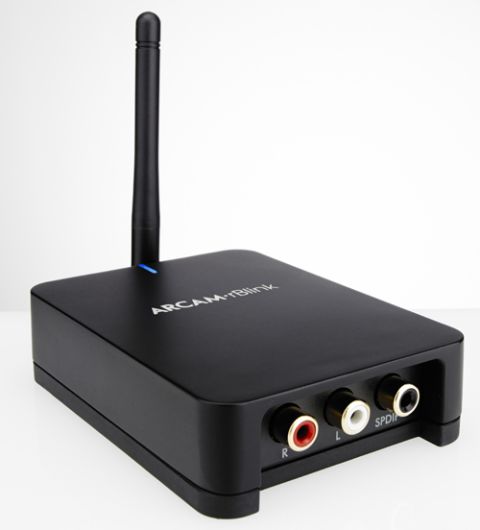 An easy way to add high quality Bluetooth to your hi-fi, but it could be more affordable

Who doesn’t want to add wireless capability to their hi-fi? As we move more to computers and smartphones as sources for our music, we also want freedom from cables – and that’s exactly what the Bluetooth-toting Arcam rBlink DAC (digital-to-analogue converter) offers.

The rBlink is a genuinely compact little device, but one that feels as solid and well put-together as you’d hope to get for £160. There are no feet on the unit, but the bottom panel is made from a soft-touch material that won’t scratch your other components or hi-fi rack.

The same thoughtfulness doesn’t seem to have been applied to the arrangement of connections, though. On one end you’ve got the stereo RCA and coaxial outputs, and at the other you’ve got the aerial, power socket and Bluetooth pairing button.

We understand why you’d want the pairing button at the front, but shouldn’t the power socket and aerial be around the back with the audio outputs – or at least down the side – for the sake of neatness? And if you are going to make the pairing button easy to access, why make it recessed so that you need a pen to press it?

In the end this is a device that needs to be accessed too frequently to be hidden away, and that will be disappointing for those who like to keep a neat system.

Once you’ve connected the rBlink (use a coaxial cable if you’ve got a decent standalone or built-in DAC) and found a pen for the pairing button, it’s just a case of making the Bluetooth connection as you would a pair of headphones.

Given the rBlink’s aptX support we start with our MacBook as a source (all MacBook’s with OS X 10.6.5 have aptX) and the results are good. It’s got little of its own character, which is a good thing, as it allows your system’s sonic traits to shine.

So, when it’s partnered with Arcam’s own A19 amp, you get a delivery that’s big in scale, deep in bass and high on detail – which is exactly how we found the A19 performed when we gave it our First Test treatment.

With the iPhone the success is a little more qualified. The lack of aptX means you don’t get quite the same level of detail or dynamics as you do from the MacBook (or other aptX phones, such as the Sony Xperia Z that we tried), but this is still a good performance by iPhone Bluetooth standards.

One of the biggest compliments we can give the rBlink is that it doesn’t immediately sound like Bluetooth at all, but if you do the comparison you will still find that your cables sound better. Compared with a simple 3.5mm-RCA connection, the rBlink lacks a bit of subtlety and detail.

Arcam rBlink review: Pairing with an Arcam A19 amplifier

Of course, you’re looking at the rBlink because you don’t want cables, and for Bluetooth it does sound good.

Arcam A19 owners will get on particularly well with it, as there’s a cable included for the amp to provide the rBlink’s power rather than use the power supply that comes with it – a feature that improves subtlety through greater low-level dynamics and the smoothing of hard edges.

Those who want to take things even further can then add the Arcam rLink, which is also fed from the A19’s power supply and does the digital-to-analogue conversion between the rBlink and A19.

That’s a total of £310 of accessories added to a £650 amp, which might seem a little excessive – but the tighter control of rhythms and greater degree of precision to the start and end of notes may be worth it to some.

The problem for us is the price. It may be a neat and well-made little unit, but £160 is pushing it a bit, especially when you consider that it’s still a sonic compromise compared with a cheap cable.

Still, if you’re the owner of one or two aptX sources and determined to go the Bluetooth, way the rBlink is a good option – especially if you’ve already got the Arcam A19.