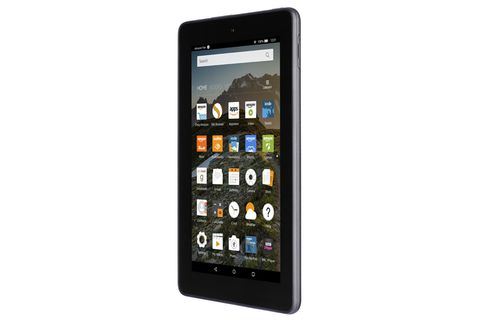 With some provisos, this is a great value tablet for those on a budget

Once upon a time, not that long ago, a budget tablet was considered anything under about £200. Then the excellent Tesco Hudl came along with its £100 price tag and everyone considered that a bargain.

Now, Amazon has delivered a tablet for just £50, and in many ways, that’s pretty much all you need to know.

Are these the best tablet specs we’ve seen? Not in the slightest. Is it going to be bothering the iPad in terms of performance? Unsurprisingly not. But that’s fairly self-evident from one look at its cost.

This tablet is all about affordability, and though it’s not short of flaws, that price is pretty difficult to ignore.

Amazon originally aimed its tablet range toward the top end of the market, but has now repositioned itself at the budget end, with the Amazon ecosystem at the heart of the Fire. It’s a clever move, because pushing Amazon’s services is what this tablet is really all about.

Every tab of the Fire OS interface (based on Android, but without access to Google Play) is built around an offering that Amazon can help you with, including books, music, movies, apps and audiobooks.

If you’re an Amazon Prime customer, you’ll have stacks of content at your fingertips ready to go – but if you’re not, you won’t find yourself short of chances to sign up.

There are plenty of suggestions for individual pieces of content to buy throughout the interface too, but the £50 tablet also comes with ads and special offers as screensavers to further tempt you into parting with your hard earned cash (you can choose to remove them for an extra tenner).

If you’ve bought music on Amazon before, you might find some music is already on your tablet thanks to Amazon’s Autorip feature, plus you can load your own content on to the Fire without spending a penny.

The 8GB onboard storage (there’s also a 16GB option, for £10 more) won’t hold your entire music library, but thankfully there is a microSD card slot for solving this issue, a nice touch at this price.

The lack of Google Play access has always put us off Amazon tabs before, mostly because the Amazon app store can just be a little slow to get apps (if at all, in some cases), but at this price it’s more acceptable, and we find it just fine for the big names like Netflix and iPlayer.

Games tend to be a little slower to appear – there’s still no sign of Asphalt 8 for example – but then this is hardly a gaming machine.

With a 1.3GHz quad-core processor and 1GB RAM, it’s pretty much the same set-up we saw on the first Nexus 7 back in 2012. We liked that tablet, but things have moved on considerably since then.

This relative lack of power shows in use. We notice more than a few stutters when scrolling through menus and loading apps can be a little sluggish.

It manages just fine with a few rounds of Angry Birds, but we’d leave graphic intense gaming to a more capable tablet.

Its design is certainly not going to win any awards, with a fairly chunky plastic build, available in a choice of four colours. It’s sturdy enough though – Amazon reckons it’s 1.8x times more durable than an iPad Air 2 – and light too at just 313g, making it easy to hold for long periods at a time.

And that’s good, because battery life is decent, with around 10 hours of video playback in it before you’ll be reaching for the charger. Make sure you give it enough time to fill up though as there’s no fast charging here, and it’ll need a good few hours to get it back up to 100 per cent.

The screen isn’t exactly anything to write home about either. At 1024 x 600 and with just 171ppi, it’s one of the lowest res screens we’ve seen on a device in a while.

You can tell this in use, with smaller thumbnails looking noticeably pixelated, and a fair amount of noise and banding appearing in video. While edges are reasonably well defined, detail within them is pretty sparse, which leaves textures looking flat and skin tones overly smoothed.

The colour palette is a little washed out too, and while we’d take its cooler, more natural handling over an over-saturated one any day, a touch more punch wouldn’t go amiss either.

It’s perfectly watchable though, with an IPS screen ensuring decent viewing angles to boot. Text looks reasonably crisp on a page too, meaning reading and browsing on Amazon’s Silk browser is a good experience as well, though we do notice the screen holds on more to fingerprints than other tablets we’ve tested.

When it comes to audio, the Fire has its tonal balance well judged, so bass isn’t overegged and the treble is kept under control too – not always the case in budget devices.

It lacks the rhythmic competence and dynamic wherewithal of pricier rivals though, meaning it’s not as exciting, nor as detailed as we’d like, but at this level, it’s an easy enough listen.

Its built-in speaker is best avoided if possible though – it’s as tinny and hard-edged as you might expect, and struggles when the volume is cranked up.

It will suffice for a bit of YouTube browsing, but for anything more in-depth, we’d recommend going for headphones.

As for the camera, you’d be better reaching for your phone when the moment strikes, as it’s likely to be lots better than what’s on offer here.

The 2MP main cam takes overly soft and noisy pictures even in decent light, while the selfie cam is the same, only worse.

Both are best left well alone unless you’re in a real photography emergency… and even then, we wouldn’t count on this to save you.

So, does Amazon’s budget £50 tablet, with all its quirks and flaws, do enough to impress at this level? Overall we have to say yes.

This is no tablet for the techies and first adopters among you, but for an affordable tablet that does the basics with reasonable ability, it ticks a lot of the boxes.

We’d like a speedier, more responsive user interface, and those looking for the absolute best in picture and audio performance should look at spending more, but if you’re searching for a tablet on a real budget, the Amazon Fire is a solid choice.