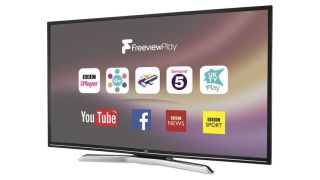 It's Black Friday, in case you hadn't noticed, and that means A LOT of TV deals. But of course, not all deals are created equally. And while it's pretty hard to buy a really bad TV nowadays, it's still worth seeking out the very best sets to maximise your TV and movie experience.

It's a full HD 1080p TV with catch-up TV, streaming apps, iPlayer, YouTube and Freeview HD. It seems to be a special TV released especially for Black Friday but is it really a deal or more of a dud?

The JVC is very cheap but the spec is pretty average. If you can find just a little more money, you can get a 4K rather than HD TV, and get a picture we're confident will be much better than this model here. Yes, it's a lot of screen for a very low price but we wouldn't bet on it offering the best performance.

The JVC C780 looks like a special TV released and featured especially in the Currys Black Friday deals. And that's no great surprise, as JVC hasn't been the most prominent name in the TV market in recent years.

The last JVC TV reviews we published were back in 2010, and the sets featured then didn't tend to do too well. It was mainly a three-star affair, with televisions tending to deliver washed-out black levels, average detail and poor motion handling. So we weren't overly enthusiastic about JVC TVs back then. Will the new JVC TVs fare any better?

The JVC LT-48C780 is a full HD TV. That's one issue - 4K TVs are so affordable now, it seems almost silly not to buy one (and quite hard not to buy one in some stores).

It offers three HDMI 1.4 inputs (that's the older spec for HDMI, but that's no great issue here). And a Scart connection for older devices, like a VHS player.

You have 'catch-up and streaming', which translates to catch-up apps from BBC, ITV, Channel 4 and Demand 5, plus YouTube, Netflix, BBC News, BBC Sport and more.

It has Freeview HD with Freeview Play, so you'll get all the standard TV channels and presented in Freeview's latest interface, which allows you to skip forward and back through the EPG.

So, the spec is OK for an HD TV. And, yes, it is very cheap. And if you're not worried about the last word in picture quality and have a tight budget, we understand the temptation. But if you can stretch a little we think you can get a lot more.