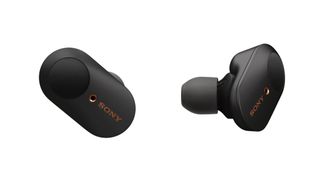 On the hunt for the best wireless earbuds? You've no doubt considered the Sony WF-1000XM3 and the Samsung Galaxy Buds Live. Both are comfortable, clever and kitted out with impressive noise-cancelling technology. But, in a head-to-head battle, which of these wireless buds are worthy of your wallet? Let's find out...

Before you splash the cash, we're going to take a closer look at how these wireless wonders stack up. The Sony WF-1000XM3s have picked up two What Hi-Fi? Awards thanks to their effortless touch controls, impressive feature-set and stellar sound.

In the past, Samsung has struggled to compete in this category but the recent release of its Galaxy Buds Live have rectified that. With their beautiful, bean-shaped design and flagship features, the third-generation Galaxy Buds mean Samsung is finally able to give Sony a serious run for its money.

So, which are the best wireless earbuds when it comes to price, battery life, features, comfort, build and sound? Read on as we compare the pros and cons of the Sony WF-1000XM3 and Samsung Galaxy Buds Live.

Both Sony and Samsung's buds are relatively kind on your wallet – Apple's noise-cancelling AirPods Pro cost £249 – but the Sonys are more affordable at the time of writing.

There's no point going cable-free if your listening sessions are cut short by poor battery performance. That's especially true when buying noise-cancelling buds, as the extra technology tends to sap the battery. Thankfully, both these buds have plenty of stamina...

The Galaxy Buds Live provide 5.5 hours of playback with noise-cancelling and Bixby voice control switched on, while the case has enough power for an extra 15 hours use.

The Sony WF-1000XM3s can stretch to six hours of playback with noise-cancelling on, while the (noticeably chunkier) charging case provides a further three charges, giving a total of 24 hours use.

In a hurry to dash out of the house? A five-minute quick charge of the Galaxy Buds Live is enough to get you around an hour’s playback. The Sony buds aren't quite as quick out of the blocks – a 10-minute charge provides 90 minutes of playback.

So, it's a photo-finish. The Sonys last 30 mins longer when using noise-cancelling, but the Galaxy Buds fast-charge at the double.

The first thing you notice about the Samsung buds is their novel 'kidney bean' shape. They're designed to nestle inside your years, whereas the chunkier Sony buds sport a teardrop-shape that sees them protrude outside of your ears.

The beauty of Samsung's design is that it's much less intrusive than other wireless buds. It's also worth noting that each shiny Samsung bud is lighter (5.6g vs 8.5g).

The Sonys might fit a wider range of ears, though. They come with no fewer than seven different sizes of ear tips, whereas the Galaxy Buds Live are supplied with two sizes of wingtip (small and large). That said, we'd happily wear either pair of buds all day so it really comes down to whether you prefer Samsung's discrete, shiny 'beans', or Sony's larger, more traditional buds.

Keen to hit the gym? You'll be glad to know that both have a water and sweat resistance rating of IPX2. You shouldn't have to worry about them falling out, either. Sony's buds feature a ‘Tri-hold structure’ that provides decent support, while the Samsung buds boast an ultra-grippy patch to keep them securely in place.

Sony's build-quality is typically excellent, but there's no denying that the Galaxy buds are the more eye-catching. They also come in three colours: the Mystic Bronze, Mystic Black or Mystic White.

It’s a brave move tinkering with a tried and tested headphone design, and we’re impressed by the execution of the Galaxy Buds Live. On the other hand, Sony's design isn't 'broken' and therefore doesn't need fixing. It really comes down to which aesthetic appeals the most.

Both of these flagship buds offer a superb feature count, so you won't feel short-changed. But some features perform better than others.

Samsung claims its active noise-cancelling technology can reduce background noise under 700Hz by up to 97 per cent, while Sony's buds boast the firm's QN1e HD noise-cancelling processor, which is virtually the same chip found in the stellar Sony WH-1000XM3 over-ear headphones.

Both do a decent job of shutting out rumbling engines and chattering voices but the Sony buds offer a tighter seal and are a bit more effective. The Galaxy Buds Live tend to let in more ambient noise, and the noise-cancelling effect is more subtle.

Samsung's companion app allows you to see the individual battery life of each earbud plus an indication of the life left in the case. You also get a ‘find my earbuds’ feature, a slew of EQ settings plus voice controls through Siri and Google Assistant. The Labs section of the app also has a nifty gaming mode, which promises low latency when playing mobile games.

Not to be outdone, Sony's latest firmware update brings Amazon Alexa support (in addition to Siri and Google Assistant), volume control via the touch-capacitive buds and a battery level indicator for the charging case in the Sony Headphones Connect app.

The Sonys are also kitted out with a proximity sensor that provides wearing detection, so the buds always know when they’re in use. Take one out and your music will automatically pause. It will then resume when you put it back in. The Samsung buds can perform the same trick – but only when paired with an Android device.

In fact, Samsung has included a smattering of features that only work with other Galaxy products, like the Galaxy S20, such as the ability to quick-pair with Samsung TVs and tablets, and the ability to share songs from one Galaxy device to another.

Finally, it's worth noting that our test of the Galaxy Buds Live did throw up a couple of bugs with both charging and playback. Hopefully these were just teething issues with early samples that could be fixed with firmware updates.

In short, both buds are dripping with cutting-edge technology. The Galaxy Buds Live could be a better option for you if you're already invested in Samsung's ecosystem but Sony's superior noise-cancelling technology means we think it wins this one.

The best wireless earbuds deliver a sense of scale that belies their tiny form factor – but which of these buds is the ultimate in portable audio?

Let's start with the double Award-winning Sony WF-1000XM3. They sound wonderfully musical and are capable of handling complex rhythms without breaking a sweat. Bass is punchy and dynamic, detail is delightfully layered and vocals are crisp. It's a bravura performance that rivals struggle to match.

The Samsung Galaxy Live Buds serve up a seriously impressive amount of bass, along with a good sense of openness and spaciousness (thanks to their 'open-air' design). However, they're lacking in dynamism and enthusiasm.

So, while the Samsung buds offer a full-bodied sound, the Sonys are noticeably more musical and provide a much more exciting listen. Quite simply, the Sony WH-1000XM3s are the best-sounding wireless buds at this kind of money.

If you already own a handful of Samsung products, you'll get more out of the Galaxy Buds Live. Samsung's latest buds offer flagship features and much-improved sound, all wrapped up in an extremely lightweight, innovative design.

However, for all the positives that come with Samsung's radical approach, the Sony WF-1000XM3s outperform their rival in several key areas: sound quality, battery life and noise-cancelling. When you throw in the fact that they're available at a lower price, it's a no-brainer.

The sublime Sony WH-1000XM3s are the best wireless earbuds and win this battle hands down.