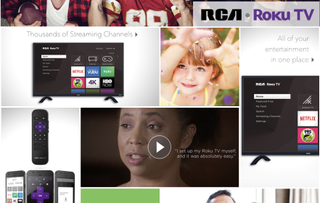 A US electronics staple since the 1920s, RCA has been providing entertainment in households for twice as long as Saturday Night Live has.

As nowadays you’ll find many a RCA 4K TV available with assorted dimensions, features and finishes – often for outrageously low prices at Walmart – it’s tough knowing where to start if you’re looking for a TV deal. Is RCA a reliable manufacturer? Are there better options elsewhere?

Perhaps the more pertinent question is: do you want the Roku smart platform inside your 4K TV for less investment than its TCL or Hisense competition? In other words, does having a whole host of video streaming services (such as Netflix, Amazon, Hulu, HBO, CBS and Sling TV) all integrated into a TV appeal to your inner couch potato? If so, an RCA could be the one – they’ve been in the Roku-embedding game since August 2017 and have Roku TVs for less than $300.

Here’s our pick of the best (Roku and non-Roku) RCA 4K TV deals available and our favorite alternatives at the price, plus our verdict on whether you should drop your hard-earned shekels on one.

Knowledge is power, so go ahead and power-up on us…

If you're not fussed about Roku, or in fact any smart platform embedded in your 4K TV, RCA's $180 43in 4K Ultra HD TV (RTU4300) is about as inexpensive as 4K models go. While we haven't tested this particular model, 161 Walmart buyers did offer their thoughts – and with reviews averaging four out of five stars, it comes off looking pretty respectable. With four HDMI ports to play with, your budget Chromecast or Amazon Fire Stick plug-in video streamer could easily be put to good use here.

If you'd prefer something bigger – 22ins bigger, in fact – RCA also offers a 55in 4K UHD model (RTU5540) similarly free of smart ties – and for almost the same rock-bottom prices. The number of HDMI ports here is still four, so after hooking up your preferred service you'll have money left for the next pay-per-view fight night.

Fully sold on having the streaming service hidden inside your 4K TV? Well, you’re in the right place: RCA’s website features just seven TVs, all with Roku integrated. As long as you can settle for a TV size smaller than 65in, there are plenty of options...

The good news is that there’s 4K UHD resolution, HDR, Roku and an LED display. The TV's stand is perhaps a tad stubbier than more premium models, but that’s part and parcel of the deal when looking to bag a TV on the cheap, right?

There's a pretty standard HDMI count of four, although the refresh rate is only 60Hz (read: the picture refreshes 60 times per second) so, theoretically anyway, images could be subject to more motion blurring during fast action scenes or gaming lag compared to a TV with a higher refresh rate.

Speaking of which... If you've a little more cash to spend, you may want to consider the $298 Hisense 50in 4K UHD model with Roku (50R6E). It has similar specifications to the RCA, but has a 120Hz refresh rate – twice that of the RCA.

If you, or someone in your household, plans on regularly using your 4K TV for gaming, it might be an extra few dollars in outlay well spent.

While we haven't seen an RCA TV in the flesh, we are familiar with Hisense's value TVs and can vouch for their quality, too.

The 55in RCA RTRU5527W 4K TV with Roku smarts has a list price of $799, but again hundreds of dollars have been shaved off the asking price, making it now $320– a real bargain for a 55in screen size. The specs are familiar: 4K, HDR, four HDMI ports, 60Hz frame rate. And Roku of course.

However, let’s assume you want 4K UHD resolution but are deep into the Android ecosystem. A TV with Google Assistant built-in could be an immensely attractive idea.

Alongside similar specifications (including the 60Hz refresh rate) and an identical screen size to the RCA, the Philips 55PFL5604/F7 also has HDR10 support and a Google Assistant mic button on the remote for voice control of your TV and compatible smart home. You could ask Google to dim the lights with Philips Hue, or alter the temperature in no time. There's no Roku, but on the Android TV interface is Google Chromecast, which means you can send content from compatible apps (Netflix, HBO, Plex, YouTube, Twitch, PlayStation Vue) directly to the TV screen from a smartphone.

There’s another option that's cheaper yet: the 55in RCA RNSMU5536 4K TV. With a Virtuoso smart platform, it has Netflix, YouTube, Twitter, Facebook, AccuWeather, Mirracast Rx, Vudu and Pandora apps built in. You don't get the variety of apps that Roku offers, but if, say, you only use Netflix and YouTube, the others are pretty futile anyway!

The Virtuoso operating system also lets you pair Bluetooth devices, use your TV as a music player and browse the web – and at $270 (with a list price of $800) it’s the most affordable of the bunch.

There are so many options in terms of resolution, screen size and smart interfaces within RCA’s arsenal of consistently budget-friendly TVs that there’s bound to be one out there that suits the needs of someone wanting a hugely-discounted, and therefore dirt-cheap, TV.

If it’s Roku you want, and you don't want the hassle of connecting and buying a separate Roku stick, RCA delivers among the very cheapest options out there.

What we can say is that on paper an RCA TV is a cost-effective solution for a regular Walmart shopper who's after a no-frills, east-to-navigate 4K screen and perhaps some integrated Roku smarts too. With deals galore, RCA's hard to ignore.