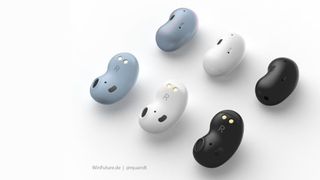 Samsung arrived late to the true wireless in-ears party, with the Galaxy Buds in March 2019. The least said about those two-star headphones the better – the sound presentation was thin and lacked detail; the app was Android only.

With the release of the Galaxy Buds Plus, Samsung added an extra star to its What Hi-Fi? review, with a few neat new features and iOS compatibility. The company has since rolled out a software update for the originals, adding Ambient Sound, Microsoft Swift Pair and personalised Spotify playlists via a tap and hold gesture, bringing them more in-line with the '+' model. That said, there's still plenty of room for improvement sonically if the next-gen set is going to deliver.

Samsung has plenty to work on ahead of The Galaxy Buds 2. So, how will they look? When will they launch? How much will they cost? And what exactly will they be called?

Let's run down the latest rumours and leaks to give you an idea of what to expect...

We first heard about the new Buds barely six weeks after the release of the Buds+, in April this year. The completely overhauled in-ears were teased at a moment when Samsung's Galaxy Buds+ were experiencing a decidedly lukewarm reception. At that point, though, the new Buds were only in an early prototype phase.

According to WinFuture, which originally broke the news and created the initial render, (main image) their internal code name at Samsung is 'Beans'.

More recent reports from Samsung specialist site, SamMobile, claim that the Korean giant's bean-shaped buds – which would succeed the February-launched Galaxy Buds+ – will be announced alongside the Galaxy Watch 3 in the build-up to Samsung's virtual Galaxy Unpacked event. Said event has now been confirmed for 5th August. Feel free to check out the very brief teaser which appears to depict what Weinbach recently called a 'mystic bronze' droplet – a potential colourway for the long-rumoured and now-leaked Note 20 Ultra. Samsung Galaxy Unpacked will be live streamed on Samsung's website and newsroom on 5th August at 3pm BST / 10am ET / 7am PST.

Samsung is also expected to unveil the Galaxy Note 20 and Galaxy Fold 2 phones at the event. That makes sense, as Samsung usually unveils its next Note handset during the autumn each year.

It is assumed that the new Galaxy Buds Live will be offered for free, or discounted, with pre-orders of the new Samsung phones (as the Galaxy Buds+ were with Galaxy S20 Series pre-orders). In order for this to happen, the new headphones will have to put in an appearance by the time said pre-orders are open.

If the renders shared online are genuine, the next-gen Samsung Galaxy Buds are completely different from their older siblings. Will this costly redesign be reflected by a hike in price?

Possibly not. While the new Galaxy Buds Live will probably be bundled or sold at a discount with pre-orders of new Samsung phones, the bean-like Buds are rumoured to have a retail price of "under $150" (approx £120, AU$219) if sold separately, according to a report from SamMobile.

That would put them in the firing line of the Apple AirPods and the recommended Cambridge Audio Melomania 1s. Further reports from SamMobile suggest a 170,000 South Korean won price-tag – the equivalent of £115/$140/AU$205.

The second-gen Buds+ launched at £159 ($150) and the original Galaxy Buds arrived in March 2019 with a £139 ($129) price. Might the Samsung Galaxy Buds undercut them both? We would expect the Galaxy Buds Live (or Galaxy Buds 2) to carry a similar price-tag and to come with a wireless charging case.

If the render is accurate, Samsung's newest Galaxy Buds are in for a big revamp.

While the Galaxy Buds and Galaxy Buds+ both stuck with a traditional stem and driver-housing design, the new model will reportedly ditch the earbud stems, so that the 'buds' actually resemble jelly beans.

The new Buds are apparently 2.8cm long and 1.3cm wide and, according to SamMobile, won’t protrude from the ear. The lower part will sit directly inside the ear canal, while the back fills the upper part of the ear. The charging cradle’s thickness is said to be a slender 2.6cm, too.

Wondering if they'll fit in your ears? The Galaxy Buds Live are not expected to come with interchangeable silicone tips, which apparently aren't required with such a design – and could lessen the effect of noise-isolating or noise-cancelling tech.

Three colours are shown in the mock-up image of the Galaxy Buds 2 (light blue, black and white), with no sign of the yellow colourway found in the Buds+.

Will Samsung follow Apple's lead and give the Galaxy Buds 2 active noise-cancellation (ANC)? It certainly sounds like it. This was the standout feature of the AirPods Pro, and arguably the biggest reason for updating your current headphones.

Samsung shareholders were apparently upset that ANC wasn't found in the Buds+ at the annual shareholders' meeting earlier this year, so it's unlikely Samsung will ignore the call to arms this time.

According to SamMobile, each Bud will feature three microphones (as seen in the Galaxy Buds+) and two speakers to enable effective call-handling, noise cancellation and voice control.

Qi wireless charging is also expected, as seen in the previous model. If you own a smartphone that is compatible with wireless PowerShare (such as the new Samsung Galaxy S20 or Galaxy S20 Ultra) the Buds should charge directly from your phone too.

We'd like to see some water resistance in Samsung's true wireless offering, which has been missing until now. Apple's AirPods Pro carry a splash-proof (though not waterproof) IPX4 rating, but an IPX7 would offer wearers an assurance that dropping one in a puddle wouldn't be the end of the road.

Also on our most-desirable list is aptX HD Bluetooth support, which is not present in the Galaxy Buds+.

We'd also like the 11-hour battery seen in the second-gen model to be maintained. While the case for the Buds+ holds one extra charge (giving a total of 22 hours of playtime before needing a power source), Samsung might decide to bring the Buds Live into Cambridge Audio Melomania territory, although 11 hours from just one charge is plenty for most people. The Melomanias offer nine hours on a single charge, plus four additional charges from the case – a whopping 45 hours.

There has been some debate over the name of Samsung's next Galaxy Buds offering. We've used both the 'Galaxy Buds Live' and 'Galaxy Buds 2' moniker throughout this preview. So, which will it be?

It depends on what kind of proposition the earbuds become. All the rumours so far point to a Galaxy Buds Live title, but we can't let go of the idea that Samsung will want to banish the mixed reception of the Buds and Buds+ by releasing an upgrade with a more resounding '2' suffix.

Whatever Samsung calls its new Galaxy Buds, we can't wait to get these unique-looking, wireless earbuds in for a thorough appraisal. Stay tuned – hopefully, it shouldn't be long now.