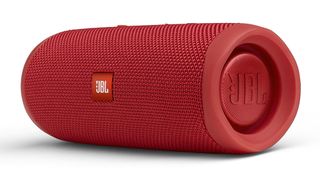 Bluetooth speakers and summer are like fish and chips, Netflix and chilling, ballroom dancing and sequins: they just go together. These often inexpensive sonic boxes turn everyone's phone into a sound system small enough to whisk away on your next adventure.

They're wireless, so there are no cables for anyone to trip over, and friends can connect wirelessly too, giving you a much broader selection of tunes. Add to this the fact that many models are waterproof, (making them ideal for the beach or pool) and, all things considered, you really have to take one of these little Bobby Dazzlers along for the ride.

JBL is a brand to look out for, consistently debuting some of the best Bluetooth speakers around. Here, we'll look at the various JBL speakers on the market, how they differ, the features they offer and, ultimately, which is the best fit for you. We've even gone to the trouble of finding the best deals and cheapest prices.

Obviously, more expensive JBL models have a few more features than their cheaper siblings. Generally speaking, the more you pay, the bigger the battery, giving you not only more time between recharges, but also the potential to juice up your phone or tablet directly from the speaker itself.

Some JBL speakers can connect to your phone's smart voice assistant, including Google Assistant, Siri or Amazon Alexa – so you could soon be asking your speaker for directions or recipe recommendations. Some older models come with JBL Connect+, a wireless technology that lets you daisy chain up to 100 JBL Connect+ enabled speakers wirelessly for mammoth, multi-room sound.

Newer models feature a similar function called PartyBoost – a feature that JBL says trounces the older variant. The more recent models are fully waterproof (not just splashproof) and a few models include a built-in mic for hands-free calling.

So without further ado, let's figure out the best JBL speaker for you. Soon, all you'll need is a glorious getaway to go with it...

Let's start with arguably the most popular JBL wireless speakers. Back in January, JBL announced the latest version of its popular Flip Bluetooth speaker. The biggest change from the Flip 4 was some new innards: the Flip 5 has what JBL calls a 'racetrack-shaped driver' which has a bigger cone area, meaning greater excursion. Does it translate to crisper highs and deeper bass? You bet it does; just read our JBL Flip 5 review.

The JBL Flip 5 also boasts 4W more power than the Flip 4 (at 20W over 16W) and while the rubberised, waterproof housing is the same as before, it comes in a range of new paint jobs. In all, there are 11 colours to choose from, including Dusty Pink, River Teal, Fiesta Red and Squad (camouflage). Like its predecessor, it is waterproof, but with no microphone in the newest model, it cannot double as a speakerphone. JBL has also axed the aux-in port seen in the Flip 4. In 2020, wireless listening is clearly the way forward, but it's still worth mentioning.

The Flip 4 was one of our favourite Bluetooth speakers around when it launched. Surprisingly, the Flip 5 is not daisy-chain compatible with its older sibling though, as it is PartyBoost (rather than Connect+) enabled. This means, in terms of either creating a stereo pair or linking multiple JBL speakers, your choices are limited to another Flip 5, the Pulse 4 or the JBL Boombox 2, although new JBL releases will doubtless support this newer, upgraded tech.

The Flips are easily portable, but JBL makes much bigger Bluetooth speakers too, such as the JBL Charge and JBL Xtreme speakers. As you'll see, they're very different beasts to a JBL Flip.

The Charge 4 is the latest in the Charge line-up. Its main selling point is the fact it can double as a portable battery pack, charging up your smartphone or tablet – the clue's in the name.

Two smartphones or tablets can connect wirelessly to the Charge 4 at once, so you can share it with a friend (as long as they have a good music taste) and it comes in plenty of colours. It has a 3.5mm headphone jack too, though using it seems a bit of a shame, given the powerful speaker at your disposal.

We loved the Charge 4 just as much as its younger sibling, the JBL Charge 3 – if not more. Both models are an absolute blast, so either way, you're buying a winner.

It can help you speak to your smartphone's voice assistant too. Just press the button, and you can summon either Amazon's Alexa or Google Assistant, much like you can with your headphones' in-line remote. There's Bluetooth but no wi-fi, so you can't stream Spotify or Tidal without going through your phone.

JBL Connect+ comes as standard, as does a 10,000mAh battery that's good for 15 hours before needing a charge. It can also juice up your mobile device using the built-in USB port.

The Xtreme 2 has more features than the Charge 4, and that carry handle is a great addition to music lovers on the move. Like JBL's other portable models, it's waterproof for up to half an hour, making it the perfect poolside companion.

The new Link Portable is a terrific speaker. It's a little bigger than the Amazon Echo Plus, and at 735g, it's still just about light enough to sling in your backpack. It's also rugged enough to survive if left there for a little while.

It will survive being submerged in water for up to 30 minutes, so it's more than qualified to accompany you to the beach or pool (or, more likely, a downpour in the middle of a barbecue). And the eight-hour battery life should be long enough for most beach/pool/BBQ sessions.

Sound quality is also top-notch, especially for a smart speaker. We gave the Link Portable a splendid five stars under review, while its older brother got four stars. In the five-star speaker, instrument separation is impressive, while there's also a healthy dose of drive and attack. Add in plenty of detail, and you have a speaker that will do you proud, whether you're relaxing at home or nodding along at the beach.

As well as Bluetooth, it has Google Chromecast, which means you can send higher quality music to it and do so from a greater distance away than with Bluetooth.

In the bass department, there's plenty of low-end rumble to trouble the neighbours, coupled with a healthy dose of warmth and stability. It's not at audiophile levels, but it's a solid performance from a £150 speaker.

Want to go smaller and cheaper? The JBL Go is the company's most affordable speaker. The JBL Go 2 joined the range in 2019, with the new speaker extending the Bluetooth range by 3m, to 21m, increasing the battery life to five hours and, thanks to its bar-of-soap shape, upping the cuteness factor substantially.

The JBL Go 2 also adds IPX7 water protection certification, so like a few other of JBL's latest offerings, can be submerged in water to a depth of up to 1m for nearly 30 minutes – ideal for taking to the beach or the pool.

Is it worth the money? Well, it's only £20-30, comes in several pearlescent and retro-fabulous colours, and it produces a great overall sound. We just wish the battery could last a bit longer.