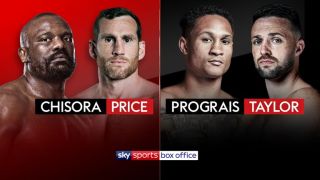 Dereck Chisora will fight David Price at London's O2 Arena on Saturday night. While the heavyweight bout will form part of the undercard – the main event is a world title fight between super-lightweights Josh Taylor and Regis Prograis – all eyes will be on what could be either fighter's final big show.

It's a huge night for Chisora, who admits he is "worried". Lose, and the 35-year-old Londoner will almost certainly end up retiring. Win, and 'Del Boy' will be on the cusp of a heavyweight world-title shot.

Price is looking to breathe life into a flagging career. The 2008 Olympic bronze medallist was only a late replacement for the fight when New Zealand's Joseph Parker fell ill after being bitten by a spider. The 36-year-old Liverpudlian has gained confidence from his last fight, though, outclassing Dave Allen in emphatic style.

Chisora starts the fight as favourite, but Price is well aware of his bruising style and penchant for crisp uppercuts after countless sparring sessions over the years.

Want to watch this nail-biting slugfest live? Here's how to live stream Chisora v Price on Saturday night, live from the O2 Arena...

The all-British dust-up takes place on Saturday 26th October at the O2 Arena in London. The action starts at 7pm with the ring walks due to take place around 9pm.

British boxing fans can watch the fight live on Sky Sports Box Office, Sky's pay-per-view channel. The fight costs £19.95, with several fights on the card including the USA's Josh Taylor vs Regis Prograis as well as the Chisora-Price fight.

Not a Sky subscriber? You can still book and watch Chisora's big domestic clash with David Price on your PC/desktop/Mac, NOW TV Box, iPhone, iPad, Android phone or Android tablet.

Not a Sky subscriber? Just watch to watch a one-off event? No problem. You can watch the biggest boxing fights live through the Now TV Smart Stick – just download the Sky Sports Box Office app and pay-per-view. View Deal

Even if you've paid to watch Chisora v Price, trying to access streams from outside your territory – if you're on holiday or working abroad, for example – is a problem. These services know your location based on your IP address, and will automatically block you – even if you're a national of one of these countries.

You can get three months free when you sign up to a year-long plan, bringing VPN access to smart devices including the Amazon Fire TV Stick, laptops, TVs and both Android and iOS mobiles and tablets.

Once you’ve made your choice, all you need to do is sign in to your VPN service through whichever device you’d like to use to watch the fight. When prompted to select a server, you need to pick one which is based in the country whose content you’d like to access. Then navigate to the relevant video streaming app or website and you’re in.

The undercard is set to begin at 2pm, ET, with the main event  – including the World Boxing Super Series super-lightweight unification fight between Regis Prograis and Josh Taylor – slated for a 4pm, ET.

The fight is not available via traditional pay-per-view channels. Instead, fans in North America can watch the fight online via DAZN, a global sports live streaming service.

Not a DAZN subscriber? Sign up for a monthly pass for $19.99 (pause or cancel at any time) or an annual pass for $99.99, which includes live events, highlights and original documentaries.

DAZN is available on a variety of platforms, including iOS/Android app, Apple TV, Google Chromecast, Xbox One, PlayStation 4 and PlayStation 3, as well as through traditional internet browsers such as Chrome, Firefox, Internet Explorer and Safari (just go to DAZN.com and sign up).View Deal

The card for Saturday 26th October