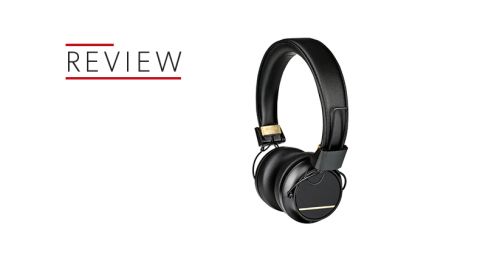 The Regents are decent performers, but lack sonic sparkle

Swedish headphone makers are doing the same trick with headphones that they pulled with lounge furniture. Urbanears, Urbanista and now Sudio are part of the Scandi pack producing low-cost and mid-price headphones to rival Beats, Sony and Sennheiser.

At £120, these aren’t the best around, though. Although they tick the right tech boxes, the Urbanista Seattle Wireless deliver a better sound for less money.

Simplifying the Swedish design manifesto into two words, you could characterise it as simple and stylish.

White headphones are tricky to pull off at the best of times, and the design of the Sudio Regents is made all the more polarising by their use of gold hardware.

The headband stems, the cups and the bottom of the headband all have flashes of gold which to our eyes makes them look a little cheaper than their £120 price.

The look can be customised, with patterned caps added to the earpieces, and the black version features less gold. Aside from the golden metal parts, the Sudio Regents are all-plastic, including the synthetic leather used for the padding on the cups and headband.

Like a lot of smaller on-ear headphones, the Sudios aren’t the most comfortable wear for longer listening. They tend to cause discomfort in your ear cartilage after a while, particularly for those who wear glasses.

The pay off is that, when fitted correctly, the Regents block out a good amount of ambient noise. With only a little lateral wiggle room to the cups, this may take some fiddling.

Positive sides to the hardware include a fold-up frame and battery life of 24 hours, which is great for an on-ear pair, if still a way off the class-leading 40-hour stamina of the Beats Solo 3 Wirelesses.

Bluetooth signal reliability is solid and there’s a 3.5mm socket for wired use, with cable included.

The Sudio Regents are reasonably enjoyable headphones that don’t make any grand mis-steps that might make them seem grossly skewed. But they also fail to excel in any way that might push them above sub-£100 pairs like the Urbanista Seattle.

Tonally they are fairly rich, with a chunky low-end and a good deal of bulk to the sound. Thin and bright the Sudio Regent are not.

They don’t appear to be harsh or sharp, with a somewhat conservative treble that still manages to relay a fair amount of detail.

However, their mids come across as claustrophobic and slightly clogged. Add mediocre transparency to a soundfield not that wide and the Sudio Regent just don’t sound very airy or nimble.

The spatial limits to the sound are too apparent, with tracks too often sounding constrained by these headphones than opened up by them.

This is something the Urbanista Seattles do better, with a more open soundstage and more tonally neutral mid-range. The Sudio Regent aren’t bad.

They’re a fairly enjoyable listen, but they just aren’t that exciting or dynamic, and don’t bring music to life in the way a £120 pair of headphones should.

Good battery life and a folding design are big positives for a portable headphone, but it’s hard to get too excited about this pair.

Their delivery contains music rather than opening it up, lacking the scope and transparency of the best headphones at the price.