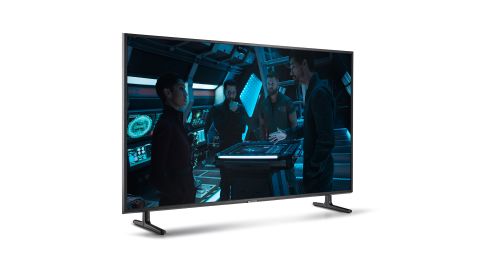 The Samsung RU8000 is an excellent performance-per-pound proposition

Such is their focus on flagship sets that TV manufacturers often overlook the mid-range when it comes to supplying us with review samples. That’s a huge shame, as this is where so much of the action is.

These are TVs for enthusiasts who can identify the features they want while dismissing those they don’t need, and who can spot the perfect performance-per-pound balance. On that basis, they can sometimes be the best TVs in a manufacturer’s range.

It’s also true that some manufacturers go the other way, delivering mid-range sets that cost only a little less than their flagship stablemates while offering a heavily downgraded, even half-cocked, performance.

Thankfully, the Samsung UE49RU8000 is an example of the mid-range at its very best. This is a TV that offers most of the performance of the company’s excellent flagship 49in set with a significant discount. It is, in other words, a great buy.

The Samsung UE49RU8000 price was £899 at launch, but it had already dropped to £749 by the time of our review. It's now available for significantly less than that and represents even more of a bargain than before.

Take the RU8000 out of its box and attach the stand and there’s little indication that this is anything other than a flagship TV. The lighter finish and comparative prominence of the bezels make them look bigger, even though they aren’t. What’s more, thanks to its edge backlighting, the RU8000 is a tiny bit slimmer than its direct, full array-backlit sibling, the Q70R. Only the rather inelegant and plasticky feet let the side down stylistically.

Samsung’s excellent One Connect solution, which sees all connections routed through a separate box connected to the TV by an almost impossibly thin cable, is missing from the RU8000 – however, it’s also missing from the Q70R. In fact, there’s currently not a 49in TV available that doesn’t necessitate source cables being plugged directly into its behind.

In the case of the RU8000, these connections are arranged in a right-facing row on the back of the set and consist of four HDMIs (one of which is ARC-enabled), two USBs, an optical output, aerial and satellite inputs, and an ethernet socket for those who prefer a wired connection to the built-in wi-fi. As is the norm for modern Samsung TVs, there’s no physical headphone output, with Bluetooth featured instead.

The quantum dots and direct backlight of the Q70R have been removed for the RU8000, but it’s otherwise a similar proposition specs-wise. For starters, the operating system is the same, and that makes the RU8000 far more pleasant to use than most non-Samsung TVs, thanks to fluid operability, intuitive organisation and an unparalleled library of streaming apps.

That streaming library includes Netflix, Amazon Prime Video, Apple TV, Disney+, Google Play Movies & TV and Rakuten in 4K and HDR; BBC iPlayer, ITV Hub, All 4 and Demand 5 for all of your catch-up needs; Plex and VLC for local streaming; and Spotify, Tidal and Deezer for music.

Samsung’s Ambient Mode, which is intended to make use of or disguise the TV when it’s not being watched, is exclusive to the company’s QLEDs so doesn’t make an appearance here, but that’s the only noticeably missing app and it’s not one that we think many will pine for.

As is standard for Samsung TVs, the RU8000 doesn’t support Dolby Vision but will handle the similar HDR10+ format (as well as standard HDR10 and HLG). We play the 4K Blu-ray of Bohemian Rhapsody and are immediately impressed with the results. The Q70R offers slightly brighter highlights and marginally more vibrant colours, but it’s surprising how close the RU8000 gets to the performance of its more expensive, QLED-based sibling.

It’s a brilliantly detailed image with sharp, clearly defined edges that render each scene with excellent depth and solidity. And those colours, while a little less vibrant than the Q70’s, are nicely judged, with a natural balance that rings true. You could even argue that the RU8000 is the better performer in this regard, as it avoids the slight over-egging of reds that we see on the Q70.

Where the gap between the two models is most keenly felt is in contrast ­– the Q70 can combine dramatically dark blacks with piercingly bright highlights more effectively. The RU8000 can go relatively black and also rather bright, but not at the same time. It’s simply got a narrower contrast band, so you need to either prioritise brightness or black depth.

But that’s not to say that you will be on the receiving end of a dull picture. While it’s not quite as dynamic as the Q70, the RU8000 is a punchy, enticing performer that merrily makes the most of this HDR10+ movie and the many HDR10 discs and streams we throw at it during testing.

We switch to SDR and throw in some upscaling for the 1080p Fargo Blu-ray, and are satisfied by the natural, even-handed delivery. This is a film full of white and grey, with regular spots of contrasting colour, and it’s vital that a TV neither exaggerates nor downplays things tonally. The RU8000 gets it just right.

The scene in which the kidnappers are pulled over is overwhelmingly dark, particularly when the witnesses are being chased down, and it’s clear that the RU8000 can’t go as black as a more premium backlit TV, let alone an OLED.

That said, there’s lots of dark detail on offer and the backlight is agreeably uniform and free of patchiness. There’s a bit of blooming around bright objects on dark backgrounds (the car headlights, for example) but, for an edge-lit set without local dimming, we’re impressed by how controlled everything is. Viewing angles are reasonable by LCD standards, too, but obviously not up there with those of an OLED or flagship QLED.

Drop down to standard-def via the built-in Freeview tuner and, while the RU8000 struggles with dense patterns, it’s comparable to the premium models at this size, once again balancing authenticity and vibrancy in satisfying style.

Gamers will also be pleased by the RU8000’s super-low input lag of 13.1ms. It alsos has a couple of gaming-specific features (such as variable refresh rate) and picture settings (including a dark detail enhancer) that help to make it an excellent gaming monitor.

Sonically, the RU8000 is a perfectly decent, if unspectacular performer. Next to the Q70R, it’s lacking in bass weight and depth, but it does boast clear, well-projected dialogue, a solid midrange with a natural richness to voices, and a controlled, smooth treble.

But, while you could certainly live with the TV’s own speakers, even a budget soundbar will prove a substantial upgrade. We heartily recommend that you add one to your shopping basket.

The Samsung UE49RU8000 is a brilliant buy. In fact, by offering most of what makes the Q70R great at a reduced price, we’d say it’s actually an even better buy than its QLED-based sibling.

It’s more of an all-rounder than the similarly priced Panasonic TX-50GX800B, too, and delivers more exciting HDR.

If you’ve got the money, Sony’s KD-49XG9005 is, without doubt, the best 49in TV you can currently buy, but if you’re looking for something a little more affordable (maybe to squeeze a soundbar within your budget), the Samsung RU8000 is absolutely the telly to get.