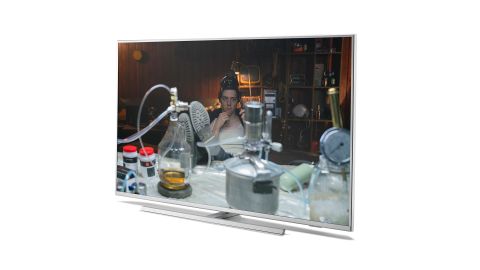 The Philips 55PUS6814/12 is a television on a budget. For those after a 55in set and the fun of the famous Ambilight technology, this TV is a good option on paper, but there are quite a few sacrifices under the hood.

The Philips 6800 series is where you lose the benefits of direct LED backlighting. Traditionally, that means less careful picture control, although this edge-lit model promises some degree of micro-dimming, at least.

There’s a big hit on the processor front too. There’s no sign of even the first generation of the Philips P5 chip that was introduced in 2017 – instead, this set makes do with the Pixel Precise Ultra HD engine.

There’s also the loss of the Android TV OS you’ll find on many of the upper-end Philips TVs too.

With all those features gone, what’s left is a good name, a good size and a good light show. But does the Philips 55PUS6814/12 still have enough picture quality to carry it through?

Physically, you get what you pay for with this 55in TV. It’s not the best looking set we’ve seen, but it’s also a long way from being the worst. Its 8cm profile puts it on the thick side, but not grotesquely so.

The plastic finish is silver from the front and white on the rear with a matching white remote control. The bezel is a relatively slender 5mm or so, thickening to about twice that on the bottom edge. There’s a long, thin bar stand for support that is tasteful enough, but could be a pain if you’ve got a soundbar that you want to position underneath.

There are three HDMI 2.0 ports with one easily accessible from the side, next to two USBs but the rest of the ports are round the back. Optical and 3.5mm headphones jacks are also included.

The big shining glory of the Philips 55PUS6814 over other competing TVs at this price is the Ambilight technology, which produces a rear-firing LED lightshow to match the colour of the image on the screen. Like most 2019 Philips TVs, this one features three-sided Ambilight around the top and the sides of the frame. You can set it to change colour according to sound or even choose a pattern to match the flag of your nation of choice – a nice touch for this summer’s Euro 2020 tournament perhaps?

You can access the Ambilight settings directly with the dedicated button on the remote and that’s handy because the Philips settings menus are something of a pain. The 6800 series is not an Android TV like the flagship models. It sports the Saphi OS instead, and that presents a number of downsides.

The home page itself isn’t too bad. One click of the home key brings you a selection of your favourite apps and access to the major sections like picture and sound settings, and input selection. The problem is that, beyond that screen, it becomes a tiresome trek through lists within lists. It’s not much fun when you just want to make simple adjustments, such as tweaking the colour or contrast.

There are quick access buttons on the remote for Netflix, Rakuten, the Philips app centre and the TV guide, but these are all easy to find from the home screen anyway. There is a contextual menu shortcut, but the controls it brings up rarely seem to be that useful.

The other major shortcoming of Saphi is that it’s light on the app front. Amazon Prime Video and the major UK catch-up services are here, as well as those mentioned above, but there’s no Twitch, VLC, Spotify, Now TV, BT Sport, Tidal or Apple TV. Deezer is as good as it gets on the music front. The implementation of the Freeview Play TV guide is not the best we’ve seen either. There’s no obvious way of filtering the content by genre or resolution. The whole system seems to be a touch slow, with too much of a pause between pressing a button on the remote and the action happening on-screen.

Fortunately, this television is fitted with HDR technology and has all those bases covered. So, no matter whether you’re watching Dolby Vision, HLG or HDR10+, you can rest assured that you’re getting the best picture possible.

The first thing we notice as we wait for The Revenant in 4K HDR to load up is that there’s a backlight issue. It’s not uncommon in edge-lit models, but it’s a problem nonetheless. Not only is there a lot of light bleed in general – it’s more of a hazy purple when it’s supposed to be black – but the backlight is uneven too. It’s understandably stronger towards the sides of the picture but there’s also a lighter crescent-shaped blotch in the middle of our unit.

The scale of the problem is obvious from the minute we enter the wintery Dakota forests featured in the film. What should be a collage of greys, blues, browns and greens is washed out with the light spilling from behind. Even with HDR, there’s a real struggle for contrast. The difference between the dark and light sections of the screen is so hampered that it’s just not possible to produce any convincing sense of shading. The result is that the picture lacks depth.

Towards the end of the opening battle, the camera pans up to the sky where a column of smoke in the foreground twists up towards the layers of clouds overhead. It’s a poetic image, but one that is rendered rather flat by this set. It’s a pity because, despite this major shortcoming, there’s plenty that this TV does well.

The detail itself in dark and light areas of the image is good, despite the serious lack of intensity to the blacks. The following twilight scenes where the fleeing trappers paddle their way down river are impressive. The different elements of detail in the image are all well-crafted and as good as any other set at this price. There are clear patterns to the rocks on the mountains, detail in the needles of the pine trees and lots of shape to the overcast sky. It’s just a shame that the limitations of the backlight kill the sense of dynamism to back it all up.

Drop down to standard def, where the contrast opportunities are not as complex, and these shortcomings are less pronounced. We watch The Amazing Spiderman 2 in Full HD and are pleased by what we see. The Pixel Precise Ultra HD engine does a good job of upscaling. There’s a better sense of drama to the image as we take in the wide shots of Spidey swinging through the skyscrapered streets. The colours of the taxis and people’s clothing pop really nicely against the more beige-toned concrete and glass of the city.

Electro’s first big scene at Times Square is a great sight. Again, it’s colourful and bright, but still natural. The neon signs are good without skin tones ever looking overly pink or red. It’s only when we get the close-ups of Electro himself that we notice the missing depth and complexity of the image. There just isn’t enough close control of the picture to see the full electric blue detail of the pulsing power that lies beneath the surface of his skin. It’s all too uniform when it should be mottled. Better sets would also add an edge more brilliance to that blue.

Sadly, the motion processing is not much to write home about either. The Saphi system offers little in the way of granular control of the motion technology. There are only three or four levels to play with, which really isn’t enough. We prefer to put up with the judder than have it on even the lowest processing setting, so would recommend switching that off.

The Philips 55PUS6814/12 comes fitted with two full range speakers on the rear, as well as Philips AI sound processing to help them work their best.

The three main choices for sound are whether or not to use the dialogue clarity option, the surround sound virtualiser or whether to switch them off, and there’s a decent argument for all of them. The dialogue enhancer definitely works and, if you’re struggling to hear what the actors on-screen are saying, then you’ll find it much easier. The downside is that it flattens the rest of the audio, by killing the dynamics and removing much of the sense of weight to any of the effects.

For example, the battle scene at the opening of The Revenant loses its impact. It’s not as frightening or intense when the arrows hit the trappers or when gun butt blows land. There’s not much difference to each of the different sounds as it all becomes a bit bright. On the plus side, you can understand all the calls of panic and even Tom Hardy’s garbled John Fitzgerald becomes decipherable.

We prefer it switched off with the surround virtualisation on instead. The loss in dynamics is far less pronounced. There’s still some sense of bass tone and there’s some great moments where the soundscape sticks you right in the middle of the battle, with screams and the projectiles flying all around you. Without the surround processing switched on, that effect is lost.

Switching back to the first sequence where Glass and his son stalk a moose through the flooded forest, the choice is justified once more. There’s enough definition and depth to the splashes of their ankle-deep footsteps in comparison to the babbles and ripples of the flowing water. At the same time, there’s a good image of the morning calls of the birds and mammals in the landscape coming from the left and right sides of our sofa.

While we’d always recommend some form of external speaker to go with your flat screen TV, the sound quality of this Philips is competitive for the money.

There’s a lot that this TV does well but much of it is ruined by the basic but fundamental flaw of its inconsistent and leaky backlight. The colours are good and the level of detail is impressive, but painting them on this patchy canvas is a bit like serving up a steak on a dustbin lid. We can ignore these failings with lower-quality content, but anything produced in HDR becomes a bit of a waste.

While there aren’t many better 55in TVs around at this price, we’d strongly recommend either spending more or choosing a slightly smaller, better quality panel for the same money instead.