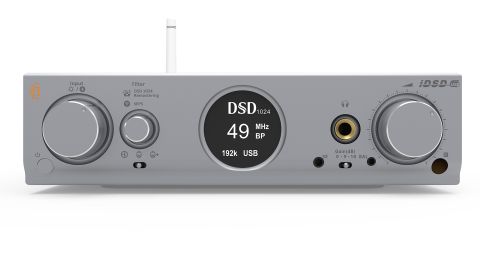 The iFi Pro iDSD is probably the most feature-packed and configurable DAC we’ve ever tested, but its performance is good rather than great

Calling iFi’s Pro iDSD just a DAC is underselling its abilities somewhat. This box of tricks does digital-to-analogue conversion, of course, but it has a whole host of other abilities that mean it can replace up to four components in your system. In fact, this iFi should really be called a streaming DAC preamp headphone amplifier, but that doesn’t trip off the tongue, does it?

While that feature list is impressive enough, considering this unit barely takes up more shelf space than a typical paperback, it’s the dizzying amount of customisation built into the product that really grabs our attention.

Let’s start with the analogue stage. You can opt for either a transistor signal path or a valve one (using a pair of General Electronics 5670 tubes). That the engineers have gone to the trouble of designing separate circuits for each amplification device, rather than using a single compromised design, tells you everything you need to know about the seriousness of the company’s approach.

It has gone one step further by offering an additional tweak on the valve option, one that reduces negative feedback to give the listener an even stronger taste of the tube sound. There are gains in fluidity by picking this option, but also trade-offs in terms of precision and solidity.

It seems that giving the listener a choice is top of the iFi’s priorities. There are just so many options to hone the sonic presentation to taste. You can upscale the input signal (regardless of whether it’s a PCM or DSD data-stream) up to DSD 512 or DSD 1024, or if the original signal is PCM, and you want to keep it that way, up to 768kHz. The differences in sound aren’t massive but they do change the character enough to make the feature worth trying.

There’s also a range of digital filters to play with, each offering a slight variation to the presentation. These filters can be switched on the fly, which makes comparing results easy enough. Initially we change settings a lot – almost track by track – but ultimately settle on doing the minimum of processing, otherwise known as the Bit Perfect option (with up-sampling turned off). This configuration sounds the most authentic, with many of the other modes perhaps a touch more detailed but lacking purity and focus in comparison. It’s a matter of taste, though, and you may prefer something different.

That desire to optimise the sound extends to more practical issues such as headphone matching. This iFi has no less than three headphone outputs – traditional 6.3mm and 3.5mm sockets as well as a 2.5mm balanced option. There’s a small gain toggle switch on the front panel to change gain, and accommodate headphones of different sensitivities more easily, which is a nice touch.

The unit’s back panel is a packed affair with both single-ended and balanced XLR analogue outs. These can be set for a fixed or variable output depending on whether you use the Pro iDSD as a preamp or not. Use it as a preamp, feeding a pair of active speakers or a separate power amp, and you can reduce the box count of your system while saving on interconnects. iFi has included a small basic remote that makes using the unit this way more practical.

The Pro iDSD can connect to your home network either wired or wirelessly. We would choose the wired option, if possible, because of the extra stability it offers. There are plenty of ways to connect a digital source. Go wireless and you can stream from Spotify, Tidal and Qobuz along with a whole host of other streaming services, provided you use the recommended Muzo app (iOS and Android available) on your control device. Airplay is also on the menu, allowing playback from a range of Apple products. It’s a shame Bluetooth hasn’t been included, as it’s the most common wireless connection people use.

Physical digital connections haven’t been overlooked with USB-A, USB-B, AES/EBU, coax and optical all featuring. One of the two coax inputs is a BNC socket, and this can be switched to work as the input for an outboard clock. If you have such a unit – such things are more common in a studio environment than a home setting – there is the potential to improve the iDSD’s performance further.

Take a look inside and you’ll find a Crysopeia FPGA (Field Programmable Gate Array) loaded with in-house software to perform up-scaling and filter duties. The job of digital-to-analogue conversion is done by a quartet of Burr Brown chips, which are used in an interleaved configuration to reduce distortion and noise.

The Pro iDSD isn’t just about computing and processing, the engineers have taken a great deal of care in ensuring the analogue audio engineering is spot-on too. They could have used a digital volume control but decided to specify a motorised Alp potentiometer instead, simply because they think it sounds better. Elsewhere, there are elaborate power supply arrangements and carefully chosen components all specified on the grounds of optimising performance.

We test two different samples of this product and both feel solid and nicely finished. We like the wavy contours on the top panel. They, along with the clear round display and compact dimensions make the Pro look rather distinctive. But things aren’t quite perfect. One of our samples froze on a couple of occasions, needing a reboot to come back to life, while the input selectors on both units have a bit of wobble. This is something iFi says is caused by the type of 360 degree controller used, but it still doesn’t feel good on a product of this price.

Much of our initial listening is done with our Apple Macbook laptop, loaded with Audirvana music software and a hard drive full of hi-res and CD-quality tunes. We use a range of headphones from the Beyerdynamic T1s and Grado’s classic RS1s through to in-ears by Shure. The range of adjustability offered by the Pro iDSD means there is never an issue with loudness levels or subtlety of volume adjustment.

Having spent a number of days getting used to the range of up-sampling and filter options, we settle on the settings with minimum processing and choose the standard valve analogue stage option. These choices get us closest to the natural tonality, refinement and musical integrity we’re after.

We play Beethoven’s Fifth Symphony and are struck by the iFi’s balanced nature. Its tonality is even, with no part of the frequency range given undue emphasis. We’re impressed by the refinement too. There’s no sign of undue harshness and the presentation sounds clean and free of grain. The iFi’s detail levels are good and it organises all that information in a musically cohesive manner.

This is a spacious sound, one that is pleasantly free of clutter and hard edges. The music’s varied dynamics are rendered with fluidity and a good degree of finesse, though without quite the forcefulness that the piece demands

Moving on to OutKast’s Speakerboxxx/The Love Below double album allows the iFi to show off its organic midrange delivery. Big Boi’s rapid-fire delivery is rendered with skill, every word easy to understand and punched out with emotion intact. The Pro iDSD captures the shifting momentum of GhettoMusick well, delivering all the excitement and energy of the track. The track’s distinctive bassline is deep, nicely textured and packed with a decent amount of authority.

All in all, it’s a good performance from the iFi. However, there’s still more available from both pieces of music. Compared to the likes of the Chord Hugo 2 (£1799) we notice shortfalls in transparency and dynamic expression. The Pro iDSD sounds a little clouded and restrained in comparison, and doesn’t have the Hugo’s brilliance when it comes to rhythmic precision or outright insight.

But let’s not get too carried away with the comparisons to the Chord. The iFi’s feature set is notably more generous, plus its form factor and connectivity make it a more natural choice to be used as part of a domestic hi-fi set-up. But that price difference of £700 between the two still weighs heavy.

Once we load the Muzo app on our iPhone 6s (iFi doesn’t have a dedicated app) we try the Pro iDSD’s wireless capabilities. It works seamlessly and we’re listening to Tidal in seconds. While the sound takes a slight dip from our ripped and downloaded music (from our reference Naim Core NAS) there’s no denying the convenience of having millions of tracks at our fingertips. Make no mistake, this is a proper source component, something that goes a way to justifying the premium price in our view.

We plug the iFi into our reference system, driving our Gamut D200i power amplifier and ATC SCM50 combination and it works well. It never sounds out of its depth and lets the rest of the system do its job properly. Sure, when we go back to our reference Naim NDS/55PS source and Gamut D3i preamp the sound gets even better, but considering the hefty price difference between the two set-ups the Pro iDSD is in no way embarrassed.

We try all sorts of file types and resolutions over the time we use this product and the iFi moves between them effortlessly. Switching between DSD, 24-bit/192kHz and 320kbps MP3 files, this unit takes it all in its stride.

While the Pro iDSD can’t topple the class leader when it comes to sound quality, it still provides an interesting alternative as far as system building is concerned. This unit, partnered with a good pair of active speakers like the awarding-winning Acoustic Energy AE1 Actives, would make a neat and capable system.

DACs: Everything you need to know

See all our iFi reviews