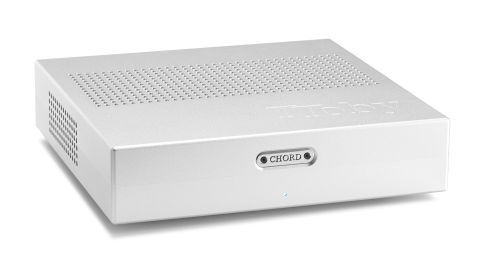 The TToby is small, well built and sounds great. What’s not to like?

It’s easy for enthusiasts to underestimate a product such as Chord’s TToby. The company’s penchant for cutesy names and bling visuals doesn’t really help this amp’s credibility with purists. A size more akin to a small box of chocolates than anything conventional doesn’t help its case either.

Factor a modest 50W per channel power output (into 8ohms) into the equation, and the TToby could easily be ignored for something equally costly, but much bigger, more powerful, and more ‘serious’ looking.

That would be a mistake. This power amp is a proper piece of kit, taking everything Chord has learnt about amplifier design over the decades and condensing it down into a surprisingly accommodating package.

Given the small size, the lack of heat produced and a power output that doubles into 4ohms, most people would expect this to be a Class D design. But that’s not the case.

Add forced air cooling using four miniature multispeed fans in what Chord describes as a ‘sonically closed anechoic plenum chamber’ and you have a relatively cool running box. Despite that elaborate arrangement, the fans were a little noisy on our review sample, which we hope isn’t typical.

The final piece of the puzzle is the high frequency power supply technology that’s been the bedrock of the Chord brand from the beginning. It’s what set the company apart when it started in the late-1980s and continues to separate its amplifiers from most of the competition, even today.

This kind of power supply is small, light and efficient, making it ideal for such a compact product. That impressive power hike into low impedance speaker loads speaks well of the power supply’s capabilities.

Take a closer look at the TToby and it’s hard not to be impressed by its build. Its casework is made of two pieces of machined aluminium rather than the simple metal panels used by most rivals. This makes the amp feel special compared to the competition.

Inside, the power supply and audio circuits are packed tightly, and we can see some of that elaborate fan cooling arrangement. The TToby is very much one of the company’s full-sized designs in miniature. It uses a full dose of the brand’s amplifier technologies with no dilution for the smaller size or lower price. That’s impressive.

Connectivity is as simple as it is on most power amplifiers. There are both single-ended RCAs and balanced XLR inputs alongside one set of speaker outputs. If you can, try using the balanced XLRs, the Chord just sounds a little more expressive when linked this way.

This amp’s natural partner is Chord’s excellent Hugo TT2 DAC/preamp. The two work together superbly, visually and sonically, as expected. But, as this is essentially just a straight power amp, we would expect it to play nicely with third-party preamps as well.

That proves to be the case. We tried Gamut’s D3i, Nagra’s valve-powered PL-P and even Townshend’s passive Allegri without issue. The TToby proves transparent enough to reflect the character of the partnering electronics, and we can’t ask for more than that.

It also proves accommodating of speakers, with ProAc’s Response D2Rs and ATC’s SCM 20s both working well. The ATC’s low sensitivity of 85dB/W/m means that the Chord’s 50W per channel output becomes a limitation at the highest volume levels with demanding recordings. But the majority of price compatible speakers are far more sensitive, so this is unlikely to be a problem unless you have a large room or listen at party levels all the time. In either case, look elsewhere.

Partnered with care, this power amplifier delivers an excellent performance. We listen to Mahler’s Symphony No 10 and are impressed by the Chord’s scale and authority. It seems incongruous that something so small can render a sound with such solidity and dynamic clout. It’s a cohesive and fluid presentation, one that takes the time to convey instrumental textures as well as delivering the sonic fireworks.

Tonally, it’s a little more full-bodied than we’ve come to expect from Chord amps, and that’s no bad thing. Some we’ve heard in the past edge towards being clinical, but not this one. We like the amp’s refinement and its refusal to sound edgy even with aggressive recordings. This Chord is transparent but doesn’t go out of its way to emphasise flaws.

Stereo imaging is another strength, with the TToby delivering a stable and expansive sound stage. Instruments are sharply focused and remain locked in position even when the piece becomes demanding. There’s a lovely sense of composure, with the amp refusing to sound stressed when pushed hard.

We switch to Radiohead’s National Anthem and the Chord responds with enthusiasm. Bass is delivered with authority but it’s also agile and tuneful – a difficult balance. With this piece we get plenty of drive coupled to impressive speed. This is a responsive amp that can track transients with precision. It’s a fast, tuneful and rhythmic performer, one that we can enjoy for hours on end.

The TToby surprised us. We weren’t expecting such a balanced and musical performance from something so compact. It just goes to show that everything should only be judged after listening. Despite appearances, this is one of the finest power amps available for the money.