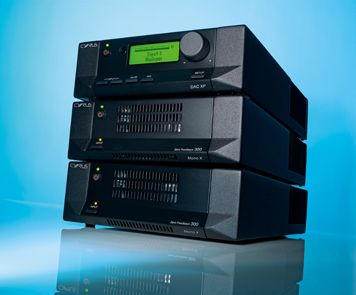 Exceptionally good. If fluidity and agility are your thing, there’s little better

Cyrus has a problem at the top end of the market.

As individual and unusual as the company’s long-running die-cast chassis is, it’s also small, light and plain – none of which appeal to a typical high-end buyer.

It’s understandable: you want to feel like you’ve got your money’s worth, and the best way of doing this is to make it big, heavy and expensively finished.

Using similar casework makes sense for brand and cost reasons, but it means the build of this £2550 monobloc seems no better than that of Cyrus’s £925 6XP integrated amp. Listen to it, though, and you’re in for a treat.

The Mono X 300 is the latest generation of the company’s top-end monobloc power amplifier.

While previous versions had been limited to 150W (into 8 ohms) output, this version increases that to 235W – deeply impressive for something so small that still using conventional linear power supplies and analogue circuitry.

Put simply, whatever happens at the output doesn’t affect the input, as it would in any traditional design. It’s a tricky circuit to create, and it gives this monobloc a combination of talents we rarely hear.

Scale and authority
Let’s get the negatives out of the way. If you value scale and authority above all else, you can do better. It’s not that the Mono X 300 is poor in these areas – its pretty good – but better can be bought for similar money.

However, when it comes to detail, transparency and agility, we think this new Mono is king at the price.

It’s massively revealing, uncovering fine detail where most rivals gloss things over, and organises every little bit with a stability that’s hard to better.

Whether you’re a fan of dense material like Mahler’s Symphony No. 10 or something simpler like Sam Cooke’s A Change is Gonna Come, the Mono X 300 takes it all in stride.

Alongside the muscle you could want, there’s a degree of subtlety you wouldn’t expect.

It’s organic without displaying even the tiniest degree of excess warmth. And that’s to say nothing of the class-leading speed and dynamic ability.