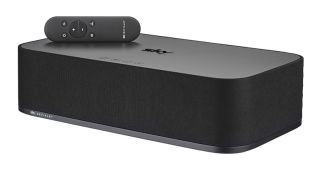 If you have a Sky subscription, you’ve got access to some incredible TV. Westworld. Fortitude. True Detective. And that’s before you flick over to Sky Cinema, with its continuous drip-drip-drip of blockbusting premieres and cult classics. Pair your Sky subscription with a decent TV and you and your eyeballs are in for a sumptuous feast of cinematic pizazz. With a 4K TV and a Sky Q subscription and you can watch in Ultra HD as well.

But what about the sound? That's where the Sky Soundbox comes in. Developed in partnership with high-end French audiophile company Devialet – yes, the same company that makes the four-star, £2,000 Gold Phantom wireless speaker – the Soundbox does for audio what a great TV does for cinema.

The Sky Soundbox may be designed to sit underneath your TV, but it isn’t a run-of-the-mill soundbar. Six 7.5cm subwoofers and three 5cm drivers punch out richly detailed, nuanced sound. Two drivers fire sideways, giving the Soundbox a surprisingly large soundstage for something that measures just under 38cm across. Aiding the large soundstage is clever processing. Ambient sounds are directed to the sideways-firing speakers, which greatly helps with immersion.

Of course, power isn't everything. Making a speaker that shakes the walls and annoys the neighbours is child's play compared to building something that does justice to smart, dialogue-driven TV. Sky Q subscribers can set the Sky Soundbox to prioritise speech, resulting in clearer, punchier dialogue. Or, they can stop smaller members of the family getting trigger-happy with the remote control by setting the Soundbox to "Kids" mode, which applies a volume limiter.

The Sky Soundbox also analyses special metadata attached to Sky Q programming, automatically selecting an audio profile that enhances the content. Connecting the Sky Soundbox is simplicity itself thanks to HDMI and optical connections for single-cable connection to a TV. There's built-in Bluetooth too, which is handy for when you want stream music from a mobile device.

And here’s the good bit. Or rather, the other good bit. What Hi-Fi? readers will be used to salivating over Devialet’s speakers, but with prices starting at £1,500 and heading north from there, not everyone can afford them. If you’re already a Sky Q subscriber with multiscreen included in your package, the Soundbox is an absolute snip at £249.

If you subscribe to one of Sky’s other packages, it’s still a considerable bargain at £299, making the Sky Soundbox a superbly economical way to get a piece of prime Devialet hardware into your front room. You can even spread the cost of the Sky Soundbox across three TV bills, meaning the only shock to your system will be your ears finally getting the full benefits of Sky’s out-of-this-world TV.

To find out more about the Sky Soundbox – and how to add it to your subscription – CLICK HERE.