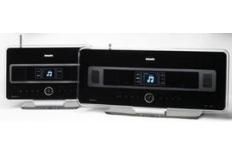 Solves one problem ('what do I do with all these wires?'), but creates another ('how do I get a good wireless sound?')

On paper, the Philips WACS7500 is the answer to every house-proud householder's dreams.

It's a central 'hub' unit, tricked out with an 80GB hard disk drive, CD player and FM radio, able wirelessly to send music to as many as five 'client' units around the home (œ700 buys the main unit and one client).

It's simple to use, too. Load a CD into the main unit, and it's quickly copied to the hard disk. Compression ratios of between 128 and 320kbps are claimed.

The disk should be good for 1500 CDs or so, and the '7500 has access to Gracenote for finding track names, album art and so on.

Turn on your client unit in a far-flung part of the house and it makes a connection to the main unit in seconds. From there, you have access to all of the music on your central hard disk drive.

So far, so great. So here's the but: neither the main unit nor the client sounds good. Both are fitted with NXT-type loudspeakers, which adds to the system's stylish cachet but does nothing for audio ability.

Looks fine, sounds poor
Low frequencies are mushy and the top end is reminiscent of someone playing tissue-paper and comb. The preset EQs make matters worse - and as for the button labelled 'incredible surround'. No it isn't...

In theory, the WACS7500 is a brilliant solution to an all-too-common problem. In practice, it solves only the wiring part of the equation - for the music-making aspect, it comes up shorter than Danny De Vito.