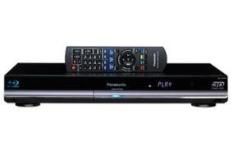 There’s plenty in the Panasonic’s specs to recommend it, and it’s an accomplished performer, too

Let's hear it for Panasonic: the one company here that's actually put some real thought into easing the cost and hassle of 3D's early adopters!

Thanks to a clever twin-HDMI set-up, buyers of the DMP-BDT300 will be able to get HD audio and 3D pictures simultaneously without having to buy a new receiver.

Samsung has multi-channel analogue outputs on its BD-C6900 for the same reason, but the company hasn't integrated the feature very thoughtfully, so Panasonic should be applauded.

That extra HDMI is likely one reason that the DMP-BDT300 is significantly more expensive than its rivals, but it's worth pointing out that this is a really solid-feeling and serious-looking player, too.

It's also packed to the gills with tech, boasting Panasonic's new Uniphier chip, Chroma Processor Plus, and a so-called ‘jitter purifier'. It is a shame it doesn't have wi-fi built-in, though, which means you'll be relying on the ethernet connection for firmware updates and internet services unless you fork out for a separate, and pricey, dongle.

You get what you pay for
So, how does it actually perform? In short, very well. The 3D Blu-ray of surprisingly dark animation Coraline demonstrates that the 'BDT300 struggles a little with fast, three-dimensional motion, but it's not alone in having that flaw, and it makes up for it to some degree with an overall crispness and depth of image that only the Sony BDP-S570 can better.

Swap to the more two-dimensional (in every way) From Paris With Love and the high-octane shoot-out in the Chinese restaurant plays out in scintillatingly sharp style, even as the characters fling themselves into cover, proving that that slight motion blur is a 3D-only issue.

Futhermore, the Panasonic deftly renders the detail in John Travolta's gurning, moustachioed face and, with the exception of a little glare on the brightest whites, successfully treads the fine line between vibrancy and realism.

3D vision, 3D sound
This scene is also a real test of sonic ability, and although the 'BDT300 doesn't define the flying bullets with quite the impact of other players, the overall fullness and weight of the delivery makes for a thumping, solid and three-dimensional presentation.

The DVD's not dead yet though, and the Panasonic digs up loads of detail from standard-def discs, although the trade-off is an occasional smidge of shimmer to complicated patterns.

One word of warning: the 'BDT300 is slow to load discs, racking up a 0-to-action time of two minutes with the Ice Age 3D disc. Still, if you're patient, the Panasonic's well worth an audition.