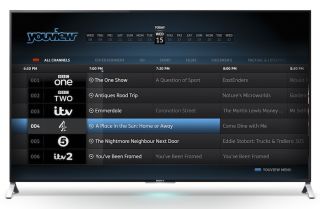 Sony announced YouView would be heading to its sets back in February, and pointed to a summer launch. However, it's only now that the company has been able to confirm exactly when you'll be able to get the service on your 2015 Sony TV.

Currently, Sony Android TV owners have to make do with 'casting' catch-up TV to their flatscreens from a compatible tablet or smartphone. The arrival of YouView will open the door to all the main services: BBC iPlayer, ITV Player, All 4 (formerly 4OD) and Demand 5, all of which you'll be able to access through the TV's 'Home' screen.

Sony is the first manufacturer to integrate YouView into a TV - previously, the service has only been available via set-top-boxes, such as the BT Ultra HD YouView box and the Humax DTR-T2000.

The update is scheduled to be available from 8am on Wednesday 4th November.