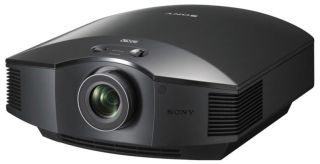 How does the Sony VPL-HW45ES, the most affordable of Sony's three Award-winning projectors, manage to win our Product of the Year award? By being modestly priced (for a projector) and delivering such a riveting picture, that's how.

With a maximum brightness of 1800 lumens, you get a clear picture even in a partially-lit room. Turn off the lights, however, and those sharp backgrounds, clean whites and flashes of special effects burst with stark contrast against convincing blacks.

The VPL-HW45ES strikes a fine balance between performance and price. It's affordable enough for anyone looking to start their home cinema system, with a picture so detailed and articulate to stand you in good stead for years.

The Epson EH-TW5350 wins our Best Projector Under £1000 category, and at around a third of the price, runs our Product of the Year winner close on value for money. It doesn’t try to be flashy or scream for sharpness, but puts across a subtlety of colour and texture that is to be applauded.

Whether you’re playing Blu-rays or DVDs, the colour palette remains natural and well balanced. Motion stays stable even in the most action-packed scenes, and when bright lamps, blazing fires and gunshots spark against shadows, it makes for an exciting, involving watch.

At just £600, the EH-TW5350 proves you can get a really skilful and enjoyable projector on a budget.

Taking the Award for Best Projector £2000+, the Sony VPL-HW65ES's excellent handling of contrast brings a true cinematic experience into the home.

While it's "only" capable of Full HD resolution, an excellent handling of contrast, combined with believable colours and a sharp picture deliver a bold image with ease and subtlety.

With native 4K projectors still some way off being affordable, this Sony projector proves that manufacturers don’t always have to push the boundaries of picture technology to give home cinema fans a superb big-screen experience.

The third Sony product to win an Award, the Sony VPL-VW520ES wins our Best 4K Projector category. So, what does £9000 buy you? Well for that you'll have a superb cutting-edge Ultra HD 4K HDR projector, which delivers the most impressive big-screen picture we’ve ever laid eyes on.

There are no shades of grey in our recommendations, this is one of the most complete projected pictures we've seen - sharp, accurate and precise, with dark and bright elements brilliantly balanced. This beast of a performer is an impressive indicator as to the future of home cinema.