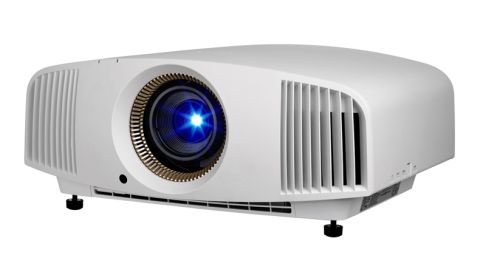 We know what you’re thinking: what does a projector have to do to justify a near-£9k price tag? You could buy a brand new car for that. Well, Sony has done some second-guessing and, as a result, given its top-tiering VPL-VW520ES everything you might (realistically) want from a 2016 projector.

That means it’s native 4K (of course!) like its predecessor, the VPL-VW500ES, and the five-star VPL-VW300ES we saw last summer. Sony’s proprietary SXRD system, which uniquely uses LCoS (Liquid Crystal on Silicon) technology – almost a cross between the usual DLP and LCD technologies – is still the only one currently offering native 4K playback, with rivals JVC and Epson only venturing as far as ‘faux-K’ projection.

But far from resting on its resolution-pushing laurels, Sony has upstaged itself in a manner in which Steve Jobs would approve, by making the VPL-VW520ES the world’s first HDR-ready 4K home cinema projector. It may as well have a big police tape-like banner across the front saying ‘future-proofed’. After all, 4K and HDR are the immediate future of the AV world, and just about ready to take centre stage in a living room near you.

HDR can be carried through the second of the Sony’s two HDMI inputs, which is HDCP 2.2 certified to pass through streamed and physical 4K content from video streaming services like Netflix and Amazon or impending Ultra HD blu-ray players.

The VPL-VW520ES uses three native 4K SXRD panels with a 4096 x 2160 resolution, as per the 4K film projection standard and much like a commercial 4K cinema. They may not be the digits you’ve clocked on TV adverts, but that’s because the panel industry shoehorns it into 3840 x 2160.

You get a lot of projector for your money – 14kg of it, in fact. It’s a bulky, well-made unit, but like its predecessors runs with the aesthetic curve to help it look more suitable to fit in with your home furnishings than something you might think had a past life as a Robot Wars contestant.

In fact, it doesn’t look too dissimilar from the brand’s five-figure flagship model, which can only be a good thing. The finish (available in white and black) is attractive, and the gold frills around the lens bring a touch of pizzazz.

Set-up is dead simple, and once powered up (it takes a few seconds to show a picture), it’s simply a case of using the motorised shift, focus and (up to 2.1x) zoom adjustments on the well-sized, backlit-on-demand remote – much more efficient, we think, than twisting dials on units with non-powered lenses. Plus, you can do it from your sofa.

Keeping the two HDMIs company on the side panel are LAN, IR and trigger inputs and a USB for firmware updates.

Taking a page out of the Victorian schoolbook, the VPL-VW520ES understands its duty to be seen and not heard. The claimed 26dB fan noise proves pretty accurate and, even sitting close by, it is easy to ignore altogether when we fire up our reference home cinema set-up.

HDR 4K material is being hailed as the predominant next-gen content, and while 4K and HDR are different technologies, they do seem to come packaged together. Combined content is still thin on the ground, although more should come trickling in this year. Even more exciting, Ultra HD blu-ray players and discs are due in the coming months too.

While 4K is all about delivering more pixels, HDR is all about extracting more information from within each pixel, opening the dynamic contrast range up to brighter whites, darker blacks and greater colour insight in between. And, trust us, it’s an impressive indicator as to the future of home cinema. We tuck into 4K HDR clips provided by Sony, on a USB stick fed through the Sony FMP-X5 4K media player, the most eye boggling of which includes footage from The Amazing Spider-Man 2.

There’s varying intensities to the voltage running down Electro’s face and the lights in Times Square’s billboards and skyscrapers. You can follow the billowing smoke from the electric sparks as it trails off into the atmosphere and, during the slow-mo, every stitch of Spidey’s sleeve.

Even Japanese cityscapes are a treat to scrutinise. Take a colourful mosaic lampshade, for example. Rather than simply seeing light glow through the whole lampshade, here each piece reveals varying degrees of light shining through.

Strip the HDR, and 4K delivery alone is still enough to turn heads. The technology has spread into the TV industry like wildfire, but arguably it’s even more important for larger projected pictures where you’ll see just how much those 8.3million pixels count.

We see a sharply drawn picture no less crisp than that on the better 4K TV pictures we’ve seen. It truly wows on our 100in screen with its sharpness, accuracy and precision – but it’s not love at first sight.

You may think our claim of the Sony’s refined, natural colours is suspect upon your first acquaintance with the projector. Indeed, out of the box they’re more ‘out there’ and oversaturated than organic. But with the trusty guidance of a THX Optimizer and a bit of patience, a thorough play with picture settings produces a calibre of picture we think befits the asking price. And taking into account what that is, that’s really saying something.

Spending time tweaking colour hues and experimenting with contrast modes pays off royally, so when we test the results on The Ridiculous 6, desert landscapes no longer look too richly hued. In fact, that spot-on palette coupled with gritty texture and wide-open insight provides a realism that’ll soon have you reaching for a glass of water.

The browns and goldens of the Wild West jump out from one another, all subtly identifiable as different in tone. The darks of trees don’t compromise the bleach-white outfits standing in front of them, and the brightness of a campfire doesn’t sacrifice dark details in the characters sitting around it.

It’s up there with one of most complete projected pictures we’ve seen, and we aren’t just talking about 4K performance. Those whose viewing habits lie mostly with Blu-ray, HD streams and DVD (which is more or less everyone) will have every reason to invest here too.

Taking a resolution knock to satisfy your Fargo addiction isn’t so bad. The HD picture sheds a layer of sharpness, losing its immaculate feel, yet it’s still a precise, mature display. Colour and contrast remain on the money – the snow as white as car tyres are black – and detail spreads evenly around the screen so textures in jumpers are as astute as details in the characters’ faces.

Motion handling doesn’t have us reaching for menu assistance (in the Sony’s case the ‘Motionflow’ mode), though anyone having trouble should find a remedy in the ‘smooth high’ setting.

A common bugbear of the very first 4K TVs was the substandard quality of standard-def – after all, they have to upscale a huge amount to fill the screen. Visually, you see that outlines have softened up and freshness is lost.

Not even a near-£9000 projector can make standard-definition content look sparkling. We wouldn’t go as far as saying skyline panoramas in our Robocop DVD are crisp or the expressions of people in the background are well-etched. But the clarity exceeds our expectations and it’s a remarkable effort – one that rubs shoulders with the best we’ve seen from a 4K telly.

Compared with Blu-rays, more motion instability is noticeable as camera pans across foyers compared to with Blu-rays, but the picture stays sufficiently coherent in action scenes. By and large, it’s more than watchable.

When an £8800 3D-compatible projector doesn’t come with any 3D glasses, though, it’s a bit like breaking the bank for a paintball session and then being charged extra for pellets. Okay, so glasses are pretty cheap these days for those who enjoy the 3D movie experience, but it’s the principle…

That said, when that’s our only gripe, we can’t help but sing the Sony VPL-VW520ES’ praises. It’s a beast of a performer with anything you throw at it and, at the moment, one of the most cutting-edge, future-proofed home cinema projectors money can buy.

If it’s within your grasp financially, and you’re all about the here-and-now rather than waiting to see what competitors respond with (because no doubt they’ll be hot on Sony’s heels) – and if you’re excited by the benefits of HDR technology – we’d be hard-pushed to recommend anything else.