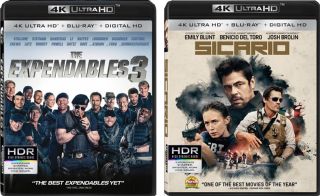 Ultra HD Blu-ray players from Panasonic and Samsung were announced at CES 2016, with both are due to go on sale in a few months time. Fortunately, it now appears there will be some Ultra HD Blu-ray discs available to play on them.

Lionsgate Home Entertainment has confirmed the first of its films to be given the Ultra HD treatment will include Sicario, The Last Witch Hunter, Ender’s Game and The Expendables 3. All four will be released on March 1st to coincide with the launch of the 4K disc players.

Lionsgate has said Sicario and The Last Witch Hunter will retail for $43 (around £30) while Ender’s Game and The Expendables 3 will cost $23 (£16), possibly due to the fact they’re older films while the first two are new releases.

Sicario, Ender’s Game and Expendables will all arrive with a Dolby Atmos soundtrack while The Last Witch Hunter will have DTS:X.

Amazon US also has some titles available for pre-order, including The Amazing Spider-Man 2, The Martian, Hancock, Salt and Chappie. These all have an RRP of $36 (£25), but Amazon is selling them for $33 (£23). At the time of writing, there's no sign of any Ultra HD Blu-rays on sale on Amazon in the UK.

With Panasonic’s player confirmed for the UK “this Spring”, we’ll hopefully see some discs on sale in the UK some time soon...