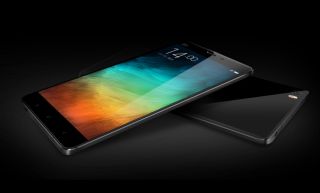 It's one of a trio of new products announced by Xiaomi, with the Mi Note packing in a Snapdragon 801 2.5GHz processor, 3GB of RAM and dual 4G Sim capabilities alongside its full HD display.

Other features of the Mi Note include the 3D curved Gorilla Glass 3 and metal frame; a Sony 13MP rear-facing camera and a 4MP front-facing camera; and a 3000mAh lithium-ion battery.

Xiaomi is also chasing the audiophile market with the Mi Note, with the smartphone capable of 24-bit/192kHz lossless audio playback and supporting DSD, WAV, APE and FLAC file formats.

Under its cover is the ESS ES9018K2M audio decoder to offer the best possible audio experience on the go. And the company is launching the Mi Headphones as a companion to the Mi Note and Mi Note Pro.

Elsewhere, Xiaomi's Mi Box Mini is a small streaming device that supports 1080p resolution video; Dolby and DTS audio; and has a Bluetooth remote control, as well as a 1.5m HDMI cable.