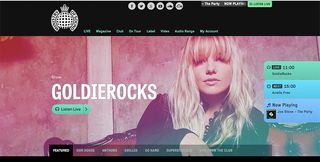 Ministry of Sound has launched a new LIVE app for streaming radio on iOS and Android. The app comprises a variety of curated music channels to match various user moods, and exclusive mixes from well-known DJs including Judge Jules, Mark Knight and Steve Aoki.

The app also plays host to LIVE, a non-stop dance music station hosted by MoS resident presenters, and it will also let users listen to a live stream from the London nightclub every Friday and Saturday night.

Lohan Presencer, CEO at Ministry of Sound, said “This is an app for people who love music but don’t have hours to spend searching for the latest tracks and remixes or re-discovering the classics.

“We wanted to create a fully accessible digital music experience with the same feel-good factor as our world famous compilation albums, which top the charts and sell millions of copies each year.”

Optoma has announced the new GT5000 ultra-short-throw projector, which is capable of producing a 100in image, 30cm from the wall. It delivers a Full HD 1080p image, has a brightness of 3000 lumens and has a 33ms input lag.

The GT5000 has two HDMI inputs and a built-in speaker that pumps of 16 watts of audio. For those wanting a bigger sound, an audio output is onboard too.

The Optoma GT5000 short-throw projector is available now for £1000.

See all our Optoma news and reviews

Sonos has announced that Audible audiobooks won’t work through the multi-room system. New accounts can’t be added, and users who have an Audible account already connected will lose access when the next software update comes in late 2015.

Sonos says the way Audible is implemented wouldn’t work with the new forthcoming changes. The company planned to have a replacement but has been unable to come up with one.

However, owners of Sonos products with a 3.5mm auxiliary input can still stream Audible content if it's streamed from a connected PC, smartphone or tablet.

MORE: Sonos - Everything you need to know

Meridian has launched two new edition DSP loudspeakers, the £6000 DSP5200.2 and the £17,000 DSP7200.2 (pictured). Meridian says both models deliver “the most accurate and effective path to high quality sound reproduction.”

The £500 Media Source 200 can be added to create a multi-room system, which can be used with iOS apps and Sooloos zone-controlling desktop software.

Another new product from Meridian is the 818V3 Reference Audio Core. It’s the third generation of the company’s home audio system hub and supports decoding of MQA sources. It’s available now for £8000.

See all our Meridian news and reviews

Astell & Kern has also decided to give one of its products a new colour finish. The Award-winning AK Jr can now be had in a new red finish with gold detailing for a limited time. The red version is exclusively available on Amazon for £399.

See all our Astell & Kern news and reviews

Beats by Dre has released a new Luxe version of its Solo 2 on-ear headphones. The Solo 2 Luxe come in a range of new gloss colour finishes and feature new premium materials around the ear cups which are said to help dissipate heat and minimise sound leakage.