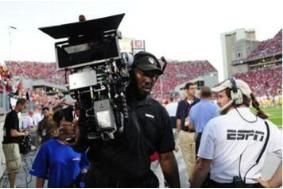 As well as the World Cup, these will include the Summer X Games extreme sports event, NBA basketball, and US college basketball and football.

ESPN says it's committed to the channel for at least a year, with a company spokesman saying "We're going to assess the viability of this as we did with all our businesses," and adding that he's confident sports fans will take to the technology.

Viewers will need both a new TV and 3D glasses to enjoy the new channel, but it's not yet clear whether new set-top boxes will be needed, or whether an extra subscription will be involved. ESPN says a deal will be in place with US distributors prior to the launch date.

The company has been testing 3D for two years, and last September test-broadcast a football game between the University of Southern California and Ohio State to the USC campus and cinemas in Ohio, Texas and Connecticut.