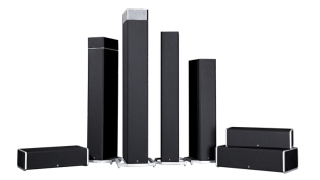 The California-based company’s first speakers were bipolar floorstanders that dispersed sound both from their fronts and rear - a technology that’s still part and parcel of the brand’s flagship floorstanders.

Three of the towers can be used with optional A90 Atmos modules (£499 per pair), while the range-topping BP9080 comes with a top-mounted, upward-firing Atmos module.

The center speakers, like the floorstanders, feature a bipolar design - and two have built-in active subwoofers.

The newer Demand Series is a three-strong range of bookshelf speakers that has been tuned by Definitive Technology’s in-house acoustics teams in Europe and the US.

The D7 (£529), D9 (£799) and D11 (£1049) all feature a tweeter offset by 5 degrees to supposedly eliminate symmetrical diffusion from the corners of the baffle and improve stereo imaging, and which also has the company’s 20/20 Wave Alignment Lens to smooth the off-axis response for enhanced dispersion.

A similar technique has also been used on the mid/bass driver.

The drivers are mounted in an inert three-layer front aluminum baffle, and the cabinets are finished in five layers of black gloss paint, with a mirror finish. The D9 and D11 feature a passive bass radiator, while the smallest Demand Series speaker, the D7, utilises a reflex port.

All three models can be wall-mounted, and there’s a locking system to fix the speakers to the optional £319 ST1 stands.

We hope to hear just how definitive the speaker brand's technologies are soon.