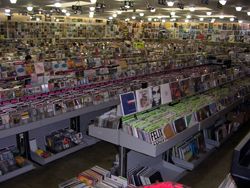 The US numbers showed a 99.6% growth year-on-year in vinyl singles according to dollar value, as a result of a 19.7% growth in the number of units sold.

LPs/EPs on vinyl, as opposed to singles, grew 34.2% in dollar value and 31.5% in terms of the number of units shipped.

Despite the growth in sales, vinyl still makes up a small percentage of the overall market.

While vinyl sales clocked-up just under six million units, this was dwarfed by CD sales at around 242m units and digital music at 1,411m units.

Vinyl sales in the UK last year were up 40% as of October 2011, helped by a strong first six months of sales, reported by The Official Charts Company.

CD single sales grew in number and value but overall CD shipments, including albums, which make up the vast majority of the CD market, fell by 4.8% in number and 8.5% in value.

The downloads market in the US showed solid growth, with the singles market growing 10.9% in units and 13.3% in value, while album sales were up 22% in terms of units shipped and 25% in terms of value.

Revenuse from subscription music sales grew to a new high of $241m in 2011, an increase in 13% from the prior year, with the number of users recorded as growing from 1.5m to 1.8m, though it's not clear which services are included.

The RIAA also notes that the music sales industry is worth less than half the total value of its peak in 1999, though total shipments were up last year for the first time since 2004.