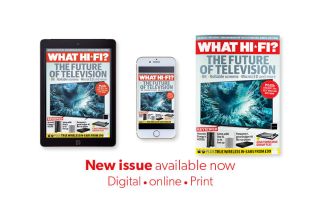 As the old adage goes: 30 days hath September, April, June, and November. All the rest have 31, except for January which has 709.

We jest, of course. But now that the first month of the year is finally behind us, we need to report back on the one important event that January did have going for it – the Consumer Electronics Show (CES) 2020 in Las Vegas. Yes, the venue makes it extra-special, but the innovations – the ground-breaking products and their creators – are the true stars. And we saw them all.

If a hot new hi-fi, AV or car audio product was unveiled, we were there – and we'll tell you all about it in the latest issue of What Hi-Fi?.

We're now back in the UK, at our desks or busily testing in our listening/AV facilities, but let us regale you with our tales of Las Vegas. We promise you'll be glad you did.

Say yes to the CES

With so much TV tech to write about during CES, we've devoted an entire feature to the subject – 2020 Vision: The Future of TV. As expected, LG, Panasonic, Samsung and Sony all used the world's largest annual technology show as a stage to reveal a few of their latest flagship ranges.

But we couldn't have predicted what, exactly, these TV giants were actually going to reveal. One brand spoke of demand for 8K resolution having 'surpassed expectations' to the point that it's releasing two 8K ranges in 2020. Another is unveiling the world's first 48in OLED screen.

Yet another has managed to finesse the idea of vibrating the TV frame (not the whole panel) so that the metal bezel is turned into a tweeter, with two full-range drivers at the base doing the rest of the sound duties.

There's no 'I' in stream

Final rehearsals are complete, the judge's challenge has been perfected, the ice has been freshly, er, zambonied and four nervous competitors lace up their skates backstage. It's like the ultimate Dancing On Ice skate-off – except each skater is, in fact, a streaming service.

Tidal, Deezer, Qobuz and Amazon Music HD are all in the running, but we've got our strictest judging hats on and will knock a point-five off whenever it's warranted. We'll explain the merits and shortfalls of each service – and crown an ultimate winner.

If you're planning on forking out for a streaming service, we urge you to give our feature a read before you make your decision. Nobody wants you to slip up, after all.

True wireless in-ears now come with myriad options, dimensions and features, all for similar money. Whether you prioritise active noise-cancellation technology, battery life, waterproofing, an athlete-worthy fit, an in-built voice assistant, intuitive controls or the ultimate in sonic fidelity, it could have an impact on the model you purchase.

We've rounded up ten sets of true wireless in-ears, each pair costing between £120 and £180, and pitted them against each other. But, as regular readers will know, true wireless headphones are not created equal, so which pair wins? You'll have to read this true wireless round-up to find out.

Setting up a turntable needn't be a hassle. Gone are the days when decks, tonearms, cartridges and phono stages had to be separately considered, bought and matched, both mechanically and electronically.

The trio of turntables we've put through their paces here all come with arms, decent cartridges and built-in phono stages. All you'll need is an amplifier or system with a spare line-level input – and that's something they all have.

Two of the three here even have USB outputs for ripping your vinyl to digital files. The third is the Rega Planar 1 Plus. Which is the best? We'll reveal all in the March issue of What Hi-Fi?.

Ah, the 1980s: Michael Knight and his self-aware car, KITT. Of course, the audio-based automotive displays at this year's CES in Vegas made the Hoff's antics look quaint by comparison, but if you are a fan of the futuristic, you'll love our Insider section this month.

This month, we hone in on the best car audio tech at CES 2020. We watched these demos with our own eyes, and yet, seeing a car genuinely inspired by James Cameron's 2009 blockbuster Avatar, it was often a struggle to believe them.

Want the best interactive 360-degree sound system on four wheels? Devialet, Sony, Sennheiser, Bose, Harman and LG are all contenders, with Audi, Chevrolet, Porsche and Mercedes-Benz (to name but a few) providing the vehicles.

Our feature gives you the rundown on who's working with who – and our initial thoughts on the sonic performances.

It's a waiting game

When it comes to 55in TVs, you might be tempted to pay top dollar for the latest, tech-laden model as soon as it hits the shops. But hold on a sec. Might it be better to buy a slightly older – but still top-end – model that's just been superseded by a 2020 release? The four TVs we're showcasing this month actually emerged as some of the top contenders of 2019.

Featuring Sony, Samsung, LG and Panasonic models, three of these TVs received our top rating of five stars at their original asking price. With just a little patience and some good timing, though, you could bag yourself a bargain.

If you happen to be in Bristol this month...

Come and say hi! Also in our March issue, you'll find a detailed lowdown what to expect at Britain's longest-running and largest consumer audio event, (now in its 33rd year) the Bristol Hi-Fi Show 2020. And we'll be there!

There's also our in-depth First Tests section, which this month features Harman Kardon's unusual Citation Tower wireless floorstanders. There's also a glorious slice of expensive but aspirational kit in our regular Temptations section, and a feature on the best music films to watch on Amazon Prime.

Finally, don't forget our regularly-updated and extensive Buyer's Guide. If you're looking to buy new equipment or to add to your existing system, do yourself a favour and come to us first – we care about getting you the right products for your budget.