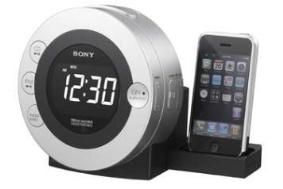 Or as Sony puts it, taking the official Apple line, its new 'Made for Ipod' range.

Actually, these aren't the first Sony iPod products: some of its systems already come with the option of an iPod cradle which connects to the company's modular DM Port socket. But these are the first standalone iPod products from the brand.

The LBT-DJ2i system is described as "perfect for mixing and playing music from iPods, CDs and other sources," the company saying that it "helps create the ultimate party soundtrack.

"With dual docks for iPods, cross-fader and 450W of power through its speakers and separate twin-driver subwoofer, this system is the complete party animal."

It has a USB socket to save your mixes, and can mix between CDs on its built-in player and an iPod, as well as between two of the pocket players.

The SRS-GU10iP speaker system has a 20W output power, piano black wooden casework and full remote control, while the larger ZS-S4iP 'boombox' has CD and MP3 CD playback, a built-in FM/AM tuner and a secure iPod dock to save the player being lost when it's carried around.

The ICF-C1iPMk2 is a compact iPod clock radio with FM/AM tuner, while the ICF-CD3iP has a CD player hidden behind its large clock display. This will play standard and MP3 CDs, and there's also an FM/AM tuner built in.