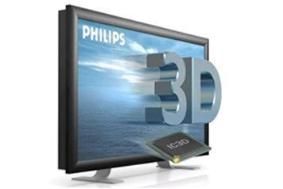 Most of the whathifi.com team will be there, along with our colleagues from Stuff.tv, to bring you daily news of all the new-tech gear heading your way in 2009.

The show kicks off on Wednesday, January 7th when we'll be covering major press conferences from LG, Toshiba, Sharp, Samsung, Sony and Panasonic. We hope to post the first stories online around 5pm GMT.

All the big manufacturers will announce their new ranges for 2009, and we'll be updating the site daily with news reports and video footage of all the latest developments.

And on January 9th we have meetings with Klipsch, NXT, SIM2 and THX, among others.

To get you in the mood, here's a taste of what's to come:

3D TV
We're expecting 3D TV to be a big development this year. We've already seen a prototype model from Philips, and LG, Sony and Samsung are among those due to show off their versions at CES.

OLED TV
We brought you a glimpse of Sony's first 11in OLED TV last year in What Hi-Fi? Sound and Vision, but our spies tell us Samsung will unveil a 40in OLED set and LG will introduce a 15in model in the second quarter of 09. Don't expect them to be cheap, mind.

Slim LED TVs
Flatscreen TVs will get even slimmer this year, with sets using LED backlighting expected from the likes of LG and Samsung.

LG says it will reduce the thickness of some sets from 3.5in to 1.7in, while Samsung is predicted to get its 50in screen down to a depth of about 1in.

LG is due to launch its LH9500 LED TV, with a massive 55in screen but measuring just 25mm deep.

Freesat TVs
Expect a range of LG Freesat sets in the UK during the first quarter of 2009, with more manufacturers to follow Panasonic's lead. And 200Hz screens will be big news too.

Blu-ray
There'll be a rash of new Blu-ray players on show, including a brand-new model from Cambridge Audio, the $999 Azur 640BD. And we'll be reporting directly from the Blu-ray Association press conference on Thursday.

Touchscreen Sony Walkman
Sony will finally unveil its rival for Apple's iPod Touch, the Walkman X Series. Details are under wraps until Wednesday, but magazine ed Richard Melville has already had an exclusive briefing from Sony HQ and we'll be posting the full story here on whathifi.com on January 7th, along with details of a new Blu-ray system and AV receiver.

Wireless networking
Bound to be a big topic at CES, with wireless connectivity between your PC and TV making a big splash. We'll be looking out for new set-top boxes that stream video, MP3s and pictures from your PC to the big screen. And could this be the year that HDTV finally goes wireless?

All this and much, much more will be brought to you live here on whathifi.com. So don't miss out – keep checking the site for regular news updates and blogs.