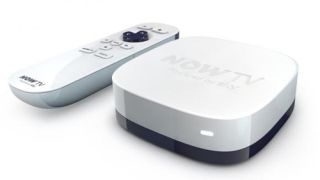 Last year Now TV became available on Roku streaming players, which cost from £50-£100. And yesterday an exclusive deal was announced to bring the Now TV app to LG Smart TVs.

Now TV offers instant access to Sky Movies and Sky Sports with no fixed contract, set-up costs or installation fee. The new £10 set-top box connects to your TV via HDMI, and then allows access via your wi-fi network to the aformentioned services on your telly.

Owners can buy a day's worth of access to Sky Sports for £9.99, or Sky Movies for £15 a month. New customers get a 30-day free trial of the Sky Movies Pass. Sky will add more "content and apps" to the Now TV box in the coming months.

Sky has made a $10m equity investment in Roku, a leading platform which delivers over-the- top (OTT) services via its innovative and low-cost streaming devices. This follows earlier confirmation that NOW TV will be made available through Roku’s UK devices. In addition to this carriage deal, the equity stake gives Sky the option to rebrand and distribute versions of Roku’s streaming devices in the future, should it wish to complement the OTT distribution it currently receives over third-party platforms.

Sky has made a $10m equity investment in Roku and said today "the equity stake gives Sky the option to rebrand and distribute versions of Roku’s streaming devices in the future, should it wish to complement the OTT distribution it currently receives over third-party platforms".

The satellite TV broadcaster has seen a five-fold year-on-year increase in on-demand downloads, which now average 6.2 million a week. And the company's mobile TV service, Sky Go, is regularly used by 3.3 million customers.