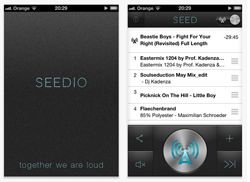 Seedio is the app in question, allowing you to send the same track to multiple phones and turn them into a synchronised 'surround sound' speaker.

Simpy install the app on each device and connect them to a Wi-Fi network to get started.

One iPhone acts as the host and then streams music to other iPhones, which act as receivers.

According to one of the developers behind the app, Seedio can theoretically connect to up to 150 phones. We’ve not had the chance to test this, but if it’s true that will make one massive (if perhaps mediocre-sounding) speaker.

It’s not going to replace a dedicated dock system any time soon, but it does create interesting possibilities for portable surround sound.

The Seedio app is free on the Apple iTunes App Store for a limited time.