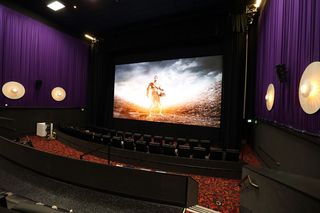 This is the world's first High Dynamic Range (HDR) LED cinema screen. And it's so good it might even make Kevin Hart's films watchable.

HDR increases the difference between the light and dark parts of a picture on-screen, adding more depth to an image. We've seen HDR in TVs before, and even in phones, but this is the first time it has been used in an LED cinema screen.

MORE: HDR TV: What is it and how can you get it

Samsung's screen is a mammoth 34ft long, with a 4K resolution (4096 x 2160 pixels). Samsung claims it will look better than an image from a projector. In fact, it says its peak brightness level is nearly ten times that of a standard cinema projector. The picture should also have no distortion and more uniformity.

Of course, an amazing screen isn't much cop if your speakers are duds. Samsung has enlisted the help of Harman Professional Solutions' Cinema Group, now part of Samsung following its recent acquisition. Exact details of the speakers are yet to be announced.

The Samsung Cinema Screen is currently undergoing the DCI certification process after completing compliance tests at Keio University in Tokyo. Samsung showed off its screen at the CinemaCon 2017 conference in Las Vegas, with a demonstration at the Cinemark Century Orleans 18 and XD Theatre.