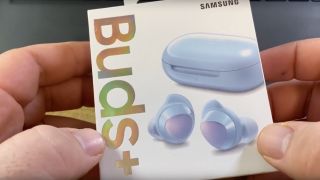 Samsung's Galaxy Buds Plus aren't supposed to be official until tomorrow's Unpacked event, but there's already a detailed unboxing and hands-on review on YouTube.

It seems a retailer accidentally shipped them early, leading WinFuture's Roland Quandt to post his thoughts in an 11-minute video.

So what does he make of them? First of all, it's worth noting that these are his thoughts, not ours, and that they are first impressions rather than the result of extensive testing (for that, you'll have to wait for our detailed review).

His findings? A little mixed. While the Galaxy Buds+ fit well enough not to miss the lack of active noise cancellation, he found the bass a little low, though that could be upped using the bass boosted EQ mode in the app.

The microphone quality could be better. Call recipients said he sounded as if he was talking on a walkie-talkie, his voice was "very nasal" and that background noise was much more prominent than when calling through the phone itself. Hmm.

Here's my crappy little HANDS ON VIDEO of the unreleased Samsung Galaxy Buds+: https://t.co/2STz76X8n0They're a decent upgrade over last years first gen. Fit my ears well, so not having ANC doesn't even really matter. 54% battery left after about 3,5h of loud punk rock music.February 8, 2020

Quandt also confirms other specs that leaked recently: each earbud has a woofer and a tweeter, with 22 hours of battery life when used with the bundled charging case. Bluetooth 5 comes as standard, as does Qi wireless charging.

They should cost $169/€169, which is slightly pricier than their predecessors.

The original Samsung Galaxy Buds were a huge disappointment, only earning two stars in our review. Whether this new model will be able to compete with other wireless earbuds rivals such as the Apple AirPods Pro and Sony WF-1000XM3 remains to be seen.

Don't forget Samsung Unpacked kicks off tomorrow at 11am PT/2pm ET/7pm GMT. We'll bring you all the news as soon as it breaks.

How to watch Samsung Unpacked 2020 live: see the Galaxy S20 unveiling as it happens