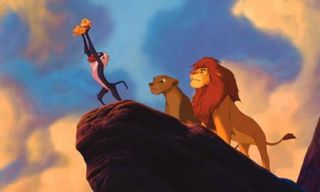 If you don’t well up at least once during The Lion King, we reckon you’re probably a robot. Disney’s 1994 classic is one of those rare films you can see over and over, and it still has the same effect on us each time.

Since its re-appearance in the cinema at the end of last year, not to mention getting a simultaneous Blu-ray release, it’s been tugging on the heartstrings of those who saw it the first time round – and now their kids, too.

And not just in two dimensions, either: Disney dug the original footage out of its archives and set a 60-strong team of talented artists, compositors, sound engineers and software developers to work on producing an all-singing, all-dancing 3D version in the space of around four months.

“We certainly didn’t anticipate doing this when we were making the original movie. We waited until now to re-release it for a couple of reasons,” says producer Don Hahn.

“The technology has caught up to us, so we were able to do a great Blu-ray version of it, and also a great 3D version. That’s something we probably couldn’t have done a couple of years ago.”

3D is the icing on the cake

“I’ve had so many people come up and say that they grew up with the movie – and now they’re taking their own families because they haven’t seen it on the big screen in 17 years. To have it go out in 3D is just the icing on the cake.”

Some re-releases tend to be tweak-fests, with extra scenes added, others taken out, Greedo shooting first… but there was no such temptation with The Lion King, according to stereoscopic supervisor Robert Neuman.

“We all handled it with kid gloves. Everyone who worked on it has a love for the medium, so we were respectful of every frame,” he says.

Hahn agrees: “There’s no new content in the film itself; we thought that withstood the test of time. The movie itself is exactly as you may have seen it back in 1994.

"We called up several of the original filmmakers – myself and the directors, plus some of the art directors and colour stylists, and most of the animators, either to work on the 3D version or to create new bonus material for the Blu-ray.”

Bonus material? Isn’t this sacrilege? Not at all, says Hahn. “We did go back and do something we hadn’t done before, though,” he grins.

“A blooper reel. We thought it’d be really funny to do outtakes. We had to animate it, so we went back and got the original voice recordings from the early Nineties, and were able to pull out some of the mistakes and bloopers and re-animate them. There are also some great making-of scenes and featurettes.”

That the team has created a Blu-ray version is enough work in itself. But taking a hand-drawn film and turning it into a 3D version is even less of a walk in the park. Neuman says the biggest challenges involved the four-legged nature of its stars.

“In a stereoscopic conversion, you take a human biped character and really all you have to do is puff them up a little – give them a little bit of volume – and they’re done. Their contact with the ground is almost a single point, which makes it a lot easier for 3D.

“Quadrupeds have a lot of depth along the Z-axis, so they require a lot more work in order to get them to look right in space. They also contact the ground at four very different locations, length-wise – especially if they’re running. So dealing with a film that was all quadruped characters makes it a lot more challenging.”

The team resisted the urge to use CG effects to ease the 3D augmentation process, saying that because the original film was hand-drawn, they wanted to retain the same look. That presented problems with effects such as rain, fog and dust, however.

“We used the original effect’s 2D rain artwork and multiplied it out. We duplicated those levels and scaled them up a bit, then placed them closer and closer to the camera. All the original effects artwork is still there,” says Neuman.

He says other changes were purely to correct minor errors that slipped through the net back in ’94. “There were a couple of little paint-pops that had passed through quality control and one little region didn’t get painted in with the right colour – so we were able to correct those.”

Both Neuman and Hahn believe strongly in using 3D as a storytelling tool – something that would enhance the narrative. And that presents its own challenges. Neuman says the first step was to come up with a ‘depth script’. “How was depth going to be used? Which shots were going to be the biggest on an emotional scale? We wanted to use depth proportionately,” he says.

But this being an animated film, of course, it isn’t as simple as moving a camera or changing focus slightly. “In live action, depth of field is a natural consequence of the physics of photography, whereas in animation it’s an effect that we dial in,” says Neuman.

He says that to do this, the team created depth maps – greyscale representations of where objects sit, depth-wise, in the 3D scene.

"We came up with some pretty sophisticated tools for creating this – for sculpting the depth – so everything in the film has internal volume and dimension. That means we can avoid a series of flat, diorama-style planes.”

Make no mistake: there are a lot of shots in this film. But that doesn’t mean a depth map had to be created for each individual frame. “I’d scribble annotations onto the images from each shot. A relatively simple one would need only a single frame marked up, while one with a more complex camera move would need several,” Neuman says.

The artists used these annotations to create the depth maps for each of these ‘keyframes’, and then software was used to automate the frames in between.

“We used bespoke software,” says Hahn. “When we did the original movie, it was produced with a lot of digital tools, which made it a little bit easier to pull it out of storage. But Robert helped to develop a series of tools that made it possible to make the movie a 3D experience.”

It wasn’t all a case of keyframe-and-push-the-button, though: “Some of the characters, like Zazu, for example, change radically from pose to pose,” Neuman says. “Each frame is almost a separate keyframe pose, so there wasn’t a lot of automated in-betweening. Our artists had to go in and treat each frame as if it were a one-off. They loved us for that!”

It’s certainly a sensitive job. The effect isn’t gimmicky or in your face; rather, it lends a lovely sense of detail and depth to the film – particularly in the opening sequence.

Hahn says the artistic process of creating the 3D had a lot to do with the drama taking place on-screen. “In the first sequence, ‘circle of life’, we wanted to establish Africa almost as a character on the screen. It was important to set some pretty ambitious goals for the 3D for the opening of the film.”

“I remember sitting down in the theatre and seeing it all play out, and as soon as the title came up at the end of that sequence, it was electrifying,” says Neuman. “I felt the hairs standing up on the back of my neck. There’s a lot of great scenes, but that’s the one that sticks with me.”

In other points, though, where two characters are in a dialogue scene or whatever, Hahn says the team was more conservative. “The goal was really to have the audience forget that they’re watching a technique, and just become immersed in the story,” he adds.

“Most of the creative decisions were based on that: where, dramatically, in the movie, do we really benefit from some more heightened 3D? In the wildebeest stampede, for example, you want to really feel like the characters are running over the camera and over the top of your head.”

Sound gets the 3D treatment too

The high-tech treatment didn’t just end with the picture. It also included sound, says Hahn. “We took our original mix to Terry Porter, who mixed the original movie, and did somewhat of a 3D mix, which means he tried to bring the sound out more in the room – which you’ll hear either in your home cinema or in the theatre.

It’s more of an immersive experience to go along with the picture – particularly the music, because that’s such a big part of the film. We tried to make you feel as though you’re sitting in the centre of the orchestra, and you really hear that music happening around you, as opposed to happening on the screen.”

And let’s not forget that, in the original 1994 version, audiences wouldn’t have been able to hear anything like the quality available to the studio engineers on their master recordings.

Now, however, the soundtrack is available in lossless DTS-HD Master Audio form, with an additional pair of surround-back channels, creating a full 7.1 mix – and it sounds breathtaking.

Which brings us to the obvious question…

“Is it better than the original? I think it’s the same as the original, only in halves,” Neuman says. “We didn’t change anything; if you close one eye, it’s all the original artwork. But the thing I find really gratifying about this job is that I’m in there working on it, having to go over every shot very intensely, frame by frame and pixel by pixel.

"But then once every sequence is completed, we view the whole thing in continuity with sound. That’s when I realize that there was something missing before”.

“I think this technology will be used for other films, too,” says Hahn. “We also did a 3D conversion of Beauty and the Beast, and I think as the demand grows among people who have 3D television sets or want more 3D content, you’ll find us looking to make more 3D films – both new and reproducing old films.”

And that can only be good news. The revamped Lion King is that perfect union of technology and artistic sensibility – never does it veer into showboating territory. And if that same sensitivity can be applied to the rest of Disney’s vast back-catalogue, it looks as though audiences will be getting lumps in their throats for many years to come.

The Lion King Diamond Edition is out now on Blu-ray, 3D Blu-ray and DVD