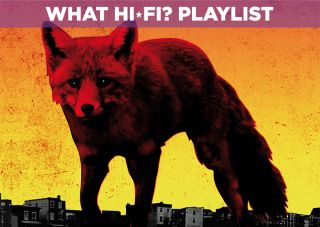 Six months or six years, it’s all the same to The Prodigy. It’s been over half a decade since Invaders Must Die but if you know anything about The Prodigy, you know what you’re getting with The Day Is My Enemy.

They may be a one-trick pony, but if you want the sort of queasy thrill that comes with being a passenger in a speeding car, and a pretty-much constant sense of danger, few are the bands who can flood you with adrenaline like The Prodigy can.

There’s an anger and attack to much of The Day Is My Enemy that might be difficult to take seriously (given the age and status of the protagonists) but it’s delivered with such implacable conviction it’s hard to doubt its sincerity. The title track, first single Nasty and Rok-Weiler in particular sink their teeth in and don’t let go.

For all its bug-eyed attention-grabbing, though, The Day Is My Enemy is knowingly disposable and unlikely to live all that long in the memory after album closer Wall Of Death has barked its last.

Similarly, while it will stretch your system in terms of timing, low-end clout and grip as well as out and out attack, it’s not a state-of-the-art production.

Dynamically it’s pretty limited – inevitable as everything starts at ‘11’ on the volume control – and there’s little in the way of soundstaging or stereo focus to get worked up about.

If you just fancy getting a sweat on, though, jump right in.

Standout track: The Day Is My Enemy – Start as you mean to go on: this is the whole album in microcosm

Buy The Day Is My Enemy on CD at Amazon

Buy The Day Is My Enemy on vinyl from Amazon