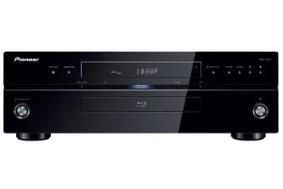 It joins the BDP-51FD, BDP-LX71 and BDP-LX08 models in the Pioneer range, and is the first to be tuned at Air Studios in London.

Regular Forum users will be delighted to know it's Profile 2.0 straight out of the box, and offers 7.1 Dolby TrueHD and DTS-HD Master Audio decoding onboard.

At the player's heart is a core processor chipset jointly developed by Pioneer and Renesas.

Optimised for all disc formats
"Our engineers were given just one objective: to develop a reference-quality BD player that provides exceptional picture and sound performance, not just for Blu-ray discs, but also for DVD and CD content," says Jim Catcheside, product manager for Pioneer UK.

Pioneer's proprietary Adaptive Bit Length Expansion technology is designed to reproduce the colours of a film in their purest form.

"Restoring the 8-bit video signals from BD movies back to a vivid 16-bit deep colour gamut results in a high-definition picture with an unprecedented range of more natural colour tones," says Catcheside.

Improved audio and CD playback
But it's not just the video side of things that Pioneer has focused on. Audiophiles will appreciate the player's extensive internal engineering, including eight Wolfson audio DACs – one for each channel – plus a dedicated power supply for the analogue audio board, and custom-made capacitors.

Meanwhile, CD playback – not something normally given much thought on Blu-ray players – is improved using Pioneer's Precision Quartz Lock System (PQLS) that controls the audio signals between the player and amplifier.

The tuning proces involved many hours at Air Studios in London, founded by legendary producer Sir George Martin (he of Beatles fame). As a result, the BDP-LX91 has been certified with 'Air Monitor' status, as indicated by the Air logo on the fascia.