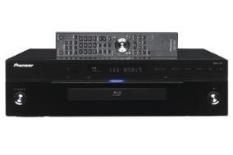 This Pioneer player might not be as slimline as its 'LX08 sibling, but it's just as stylish. The glossy finish combines with sharp lines, seductive glowing lights and touch sensitive buttons to produce a machine that is sumptuously luxurious.

The BDP-LX71 is a fully-fledged Blu-ray player and as such comes complete with coaxial, optical and seven-channel analogue outputs and HD audio decoding (although not yet DTS-HD Master Audio).

Fed the Blu-ray of the brutal action flick Blood Diamond, the Pioneer produces an image full of punch, vibrancy and insight. The player's colour palette is vivid enough to produce excellent, lush scenery, while also having to reproduce skin tones with balanced, natural realism.

The rapid action of the RUF's savage attack on Freetown plays without judder or smear. Switch to The X-Files: I Want to Believe on DVD, and the BDP-LX71 further impresses by happily contrasting the film's snowy landscape with the black of the night sky.

In its delivery of sound, the Pioneer proves to be an expressive and subtle performer with both HD audio and CDs.

If you are connecting to an older receiver, the onboard decoding is very good indeed, but if you have a modern, price-appropriate multichannel amplifier, we'd suggest letting that do the decoding.

DVD playback is also detailed and sharp, but the BDP-LX71 can't quite match the benchmarks set by the more expensive Blu-ray players on the market.

Other Pioneers offer better value This 'LX71's only real problem is a self-inflicted one. Now that Pioneer has added new players to its range, including one that costs £200 less (the BDP-51FD) the 'LX71 doesn't make as much monetary sense as it did when first released.

Video and sound performance are virtually identical with both Pioneer machines, and the only major difference is the lack of touch sensitive buttons on the cheaper model.

But if this is a feature that you really want, then the BDP-LX71 is still a fantastic purchase.