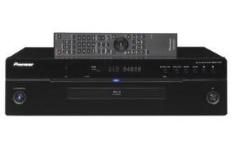 The BDP-51FD produces picture and sound quality way above its station - what are you waiting for?

The BDP-51FD shares many features of the Pioneer's successful step-up model, the Award-winning BDP-LX71.

In fact the players are virtually identical apart from the plastic, gloss black fascia and standard buttons on the new model. Even in its cheaper suit, the '51FD still looks fairly handsome.

You don't lose anything in terms of connectivity. An HDMI output, eight-channel analogue outputs and a separate two-channel output for CD playback are all present, though the phono sockets aren't gold plated like those on the 'LX71.

The biggest difference is that this entry-level model has to make do with a slightly lower-grade video DAC (12-bit/108MHz as opposed to 12-bit/216MHz on the 'LX71).

Pioneer has assured us that the update will be available in February or March next year, but it's still an inconvenience to owners who need the player to decode onboard.

There are no complaints with audio. The '51FD has refinement and finesse in spades. The opening credits to Sweeney Todd: The Demon Barber of Fleet Street sound dynamic and dramatic – a fine start to this bloody film.

The Pioneer continues its fine sonic performance with detailed dialogue, capturing the venom and anger in Johnny Depp's voice.

The Pioneer does itself no harm with DVD playback either. Upscaled 1080p images are detailed and well-defined: Tropic Thunder looks lush and vibrant.

Pioneer's foray into the lower price points is a great success. This level of performance used to be out of reach for many; the '51FD has made it much more accessible.