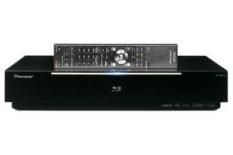 We'd hardly call Pioneer's '51FD and 'LX71 Blu-ray players aesthetically challenged, but there's no accounting for taste, so the company has a style-oriented player up its sleeve.

The BDP-LX08 is a sleek 4cm thinner (top to bottom) than its siblings. It will combine with a matching home cinema receiver to form a Pioneer BD home cinema system.

The player's aluminium top plate and black acrylic front are about as minimalist as you can get. Press ‘open' on the aluminium remote control and the front panel drops to reveal a disc drawer and display.

While the player looks different on the outside, however, everything internal is the same as that found under the bonnet of the 'LX71. The LX08 boasts the same user-friendly GUI (Graphical User Interface). It also features Pioneer's Precision Quartz Lock System (PQLS), designed to deliver jitter-free CD playback over HDMI.

You'll need to partner the player with a compatible Pioneer AV receiver (such as the SC-LX81) to access this functionality. The 'LX08 allows you to access the preset and customisable video settings in Pioneer's Video Adjust menu to help achieve the best picture quality for your display device.

Images are beautifully clear and three-dimensional. All the bizarre creatures that appear throughout the film look enchanting and life-like. Black depth and detail are nothing short of superb.

Even during CD playback, high frequencies maintain a refined and natural tone – the player's ability to time accurately is a world away from the majority of disc-spinners on display.

However, when you consider Pioneer's very own £400 '51FD is just as good a player, is the slimline design worth the extra cash? We think probably not.