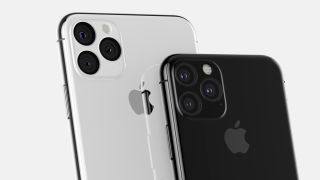 Foldable phone fans will have all eyes on Samsung's highly anticipated Galaxy Z Flip next week, when the Korean company's next bendy device is expected to be announced at its Galaxy Unpacked event. But, there's now something else to whet their appetite: the prospect of a foldable iPhone.

Apple has been granted a patent for a new hinge technology, as spied by MacRumours, suggesting the company could be exploring a foldable iPhone (or even iPad) design.

The filing, which was published by the U.S. Patent and Trademark Office yesterday (4th February), describes an electronic device that 'may have a flexible display that overlaps an axis... the housing may be placed in an unfolded configuration to support the display in a planar state. The housing may also be placed in a folded configuration by rotating the first and second portions relative to each other'.

The hinge design features movable flaps to help prevent the screen from being creased when folded, which has been an issue with some foldable phones such as Huawei's Mate X and Samsung's Galaxy Fold.

The patent is an indication that Apple is dabbling with foldable device designs, but it's far too early to tell when, or even if, the design will progress to production.

Considering Apple's renowned restraint when it comes to rushing into novel technologies and the issues some manufacturers have had with their folding devices (cough, Galaxy Fold, cough), we wouldn't expect to see a folding iPhone for some time yet.

Apple wireless headphones could soon be with us, fresh leak suggests

How to watch Samsung Unpacked 2020 live