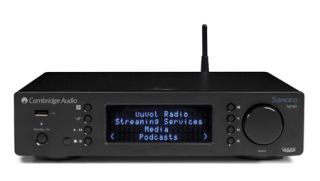 Cambridge Audio's long-awaited NP30 network music player, revealed at CES 2011 in January, will finally go on sale in the UK next week for £399.95.

The NP30 enables 24-bit audio playback, has access to streaming music services and internet radio stations, and offers a free remote control app for iPhone, iPod Touch and iPad. It can be connected to your home network via ethernet or wi-fi.

We have also been given a sneak preview of an Android version of the app here in Munich. It's still in the development stage but should be available later this year.

As part of the launch the company is unveiling 'a new organic digital platform' called UuVol. This platform groups together the streaming services, internet radio and remote control.

It ships with a range of popular internet services onboard, including Aupeo!, BBC iPlayer Radio, Pandora, Rhapsody and MP3Tunes. Additional services will continue to be added to UuVol, says Cambridge Audio.

Our news ed Joe Cox is in Munich with Cambridge Audio today, so we'll bring you more details as soon as we get them.