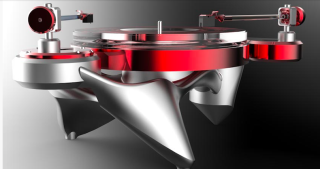 If you landed on Metaxas & Sins’ website (which you might want to, by the way), you’d be forgiven for thinking you’d been redirected to a Robot Wars web page.

Since its launch in 1981, the Netherlands-based audio company (founded by Kostas Metaxas) has created high-end hi-fi with futuristic designs you think you’d more likely spot in a Robocop film than in someone’s home.

Indeed, as M&S proudly admit to themselves, its armful of products embodies designs that would not look out of place in the Museum of Modern Art.

With everything from pre-amplifiers to power amps, tape decks to speakers, headphone amps to... a fountain pen (yes, a pen) in its extravagant catalogue, the brand has now announced a turntable. Yes, a crazy-looking, mega-expensive, no-holds-barred turntable. And, not so catchily, it’s called The Phonographic Perambulator Turntable.

It runs on a Swiss Maxon motor belt-driven system; is machined from a solid block of aircraft grade aluminum and titanium; and is equipped with an aluminum platter base and a tonearm with a pure Sapphire tube and jewelled bearings. Like every M&S product, it's been handmade by Kostas and his two sons.

We don’t know all the ins and outs at this stage, but naturally we hope to get a good look at (and perhaps listen to) it at the Munich High End show in May, where it will make its world debut.

The Phonographic Perambulator Turntable is available to pre-order now. We know what you're thinking: "I'll take two".