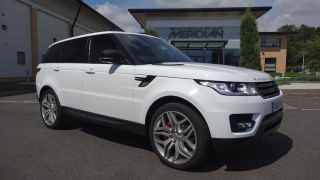 The Signature Reference System, a £4000 option for the Range Rover Sport, uses an impressive 23 speakers in total, including four height channels - two in the headliner at the front and two in the roof at the rear.

At its heart lies Meridian's Trifield 3D sound processing (a tweaked version of its standard Trifield tech, found in the Jaguar F-Type) which takes a stereo signal and blends it with all the other surround speakers, including the height channels, to give a convincing experience for driver and passenger alike.

Meridian claims Trifield 3D is a way of getting people in the car closer to the music. One of the age-old issues for in-car audio is that the vast majority of speakers are positioned below ear level, tucked away in door panels and under seats. Not good. Using these new channels to raise the overall height of the audio in the car helps to create a more cohesive and realistic stereo image.

Through the system's audio settings (which unfortunately means using the sluggish and unintuitive touchscreen interface) you can flick between Trifield 3D and the equivalent sound processing modes from Dolby (Pro Logic IIz) and DTS (Neo:X). Each brings with it a slightly different balance - DTS Neo: X sounds thinner and less refined, while Trifield sounds much more evenly balanced. Play Adele's Skyfall and the artist sounds closer, you feel more of a connection with the music and a greater sense of involvement, even if you are stuck in rush-hour traffic on the M25.

You can also switch the 3D effect off and remove the height channels from the equation entirely. The benefit is a small but noticeable boost in punch and precision, but the trade-off is that the soundstage drops back, in towards the dashboard and windscreen. You're more aware of where the music is coming from, and the overall experience isn't quite as enjoyable.

Given the number of speakers to integrate, Meridian does a good job of knitting them all together, although there are occasions when bass notes feel a touch disjointed and you lose some of the rhythm of a track. Music doesn't flow with the same sense of musicality and excitement from the music as it does through Porsche's equivalent Burmester system.

But in general the use of height speakers in the Signature Reference System has to be considered a success. The extra channels bring a new and slightly different dimension to in-car audio and it has heightened our interest as to where this will lead in the future...