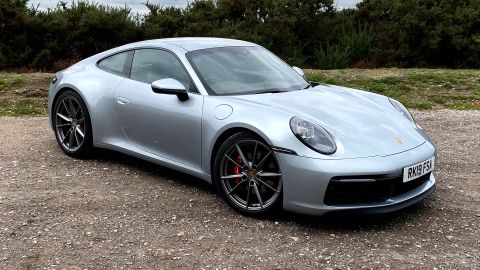 Once it’s battled through the road and engine noise, this Burmester system really sings. It’s agility and insight is a great fit for the Porsche 911’s sporty character.

Bigger or smaller alloys? Sport Seats or Sports Seats Plus? Carbon fibre or wood interior? Bose or Burmester? If you happen to be on the Porsche car configurator, looking to build a brand new 911 (992), you’ve got a number of big (not to mention enviable) decisions to make.

Choosing between audio systems can be the trickiest task of all – being able to audition all the options before you buy isn’t always possible. Which is where we come in. Porsche was kind enough to lend us two similarly-specced cars, one with Bose, the other with the upgraded Burmester set-up. So, which box deserves your tick?

You get 12 speakers and 570W of power with the Bose set-up, which also includes the company’s Centrepoint 2 and SurroundStage audio processing, plus its AudioPilot Noise Compensation technology. The price is £1002/$1600, which seems reasonable in the grand scheme of things.

Contrast this with the Burmester system’s 13-speaker, 855W set-up. It includes higher-grade components, including special AMT tweeters (Air Motion Transformers) which Burmester claims allows for ultra-precise playback at high sound levels. The difference in speaker numbers is thanks to the use of a two-way centre speaker in the middle of the dashboard. The Bose system uses just a single midrange speaker.

The Burmester system also has an equivalent version of AudioPilot, which is referred to as Sound Conditioner. If you were assuming there would be a decent jump in price moving from Bose to Burmester, you’d be correct. Burmester’s offering costs £3258/$5560.

Part of the listening process for any car involves cycling through all the various listening modes and sound presets and the Porsche set-up is no different. There are five in total: Pure, Smooth, Live, Surround and Sound Enhance.

They are configurable in every source mode, so you can pick and choose if you want a different setting when listening to DAB radio compared to when you’re listening over Bluetooth or a wired connection.

The pick of these is Pure. Smooth rolls everything off, restricting the system’s dynamics, Live tweaks the processing in an attempt to sound like you’re at a concert. You appear to get an increase in height and surround effects and a shift in the way music is balanced, but it’s not really to our taste.

Surround Enhance gives the soundfield a broader reach, but the trade-off is that the system loses focus and its character becomes a little less interesting. Sound Enhancer claims to improve compressed music formats, but since we’re listening to CD-quality tracks through Tidal and a wired USB connection there’s no need for it. However, if you are using compressed downloads from Apple Music or Spotify it’s worth experimenting.

There’s one extra feature called Sound Conditioner, which gives everything a boost to compete with interior noise while you’re driving, adjusting volume and tone on the fly.

We tend to avoid settings such as this, as they can skew the balance of a system quite badly. To its credit, though, Porsche’s version of the tech doesn’t sound as messy or artificial as it does on some other systems.

The car also generates a lot of road and engine noise, so when it’s turned off you find yourself manually adjusting the volume quite regularly. You’re thankful for the extra help.

The 992 Carrera gets the latest version of Porsche’s PCM (Porche Communication Management) infotainment set-up. At its heart lies a large 10.9in touchscreen display. It’s similar to, but a little smaller than the display found in the Bentley Continental GT.

It’s a punchy and bright screen that’s easy to read, although the actual infotainment system isn’t the most intuitive. You can assign buttons on the steering wheel to carry out various commands, but navigating your way around the menus is more of a start/stop affair.

The Mercedes system which includes steering-wheel-mounted touch controls is slicker, more intuitive and tends to be less distracting. It’s a similar case with BMW’s iDrive system.

There’s a tone with every tap of the touchscreen, but it doesn’t respond with the haptic feedback of the latest Audi systems, for example. It all feels a little vague when you’re trying to navigate. There is a rotary dial on the right side of the centre console, but this is fiddlier than we’d like.

The Porsche system supports Apple CarPlay but not Android Auto, which is a shame. Apple’s in-car operating system is a good fit for the Porsche’s screen, with plenty of room for app icons and album artwork to be displayed.

We kick things off with the Bose system and are pleasantly surprised. The level of integration between the speakers is excellent, with the system masking its subwoofer, yet still managing to deliver solid and weighty bass.

It’s a balanced sound too. There’s no scratchy or brittle treble to contend with and while there’s plentiful bass, it doesn’t ever really feel too tubby or out of control.

There’s a good sense of rhythm to Kings Of Leon’s Comeback Story. The drumbeat and bass guitar rumble along at a good pace and the vocal is perfectly clear. It’s a solid-sounding system.

But switch over to the Burmester set-up and the overall quality of sound goes up a few notches. Those ribbon tweeters make their presence felt and there’s a newfound crispness to highs. Edges of notes are more sharply drawn, there’s more space around the different elements of a track and there’s greater dynamic thrust.

It might look like a small change on paper, but adding the extra speaker at the front of the cabin also helps shore up the soundstage. It sounds more balanced and detailed. It feels as though you’re getting more information and a more convincing soundstage. Once again, the integration between all the speakers is excellent, with bass, mids and highs working together as a seamless whole.

Play Teenage Angst by Placebo, and the high-hat sets the pace. It handles this zippy percussion with a great sense of speed and agility, similar to how the car handles on a twisty B-road. Detail levels are superb, even when faced with a cabin that isn’t the quietest when the car pushes on. There’s a crispness to each drum thwack and a difference in texture and dynamics, but there are no hard or rough edges. The system maintains a keen tempo, keeping in top gear until the track coasts to its conclusion.

Switch to a track which demands greater care and consideration, and the Burmester extends its lead, peeling away extra layers of detail compared to the Bose. We play Billie Eilish’s Ocean Eyes and her vocal is beautifully presented. It’s positioned precisely in your soundstage and each subtle dynamic shift can be heard. The texture of her voice, the piano and the moody melancholic bassline offer an extra dose of realism.

Given its price premium, you’d hope that the Burmester system would take the audio to the next level and it doesn’t disappoint.

Bose’s offering is a decent all-rounder for the money, but it can’t match the Burmester for out and out quality. With more detail, a more convincing soundstage, and better dynamics, the Burmester makes for a more interesting listen. We know which options box would get our tick.

See all our Burmester reviews