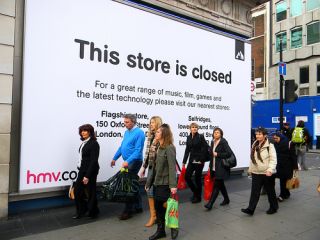 HMV will start accepting gift vouchers again from Tuesday, January 22nd administrator Deloitte has confirmed. Previously it had said that gift cards could not be redeemed in store.

Given that many people received HMV vouchers for Christmas, that's good news. Deloitte says it can now honour the vouchers after assessing HMV's financial position.

The threat of cut-throat pricing by internet retailers and supermarkets has led the world's biggest music labels and film studios to put together a rescue package to save troubled retailer HMV, reports The Sunday Times.

They fear domination of music and film distribution by the likes of Amazon, Tesco and iTunes if HMV goes under.

Universal Music, Warner Music and Sony are set to cut the price of CDs and DVDs, and give HMV generous credit terms in a last-ditch attempt to save the High Street chain. The rescue bid is also expected to get backing from 20th Century Fox, Universal Studios and Warner Bros.

Although it is now in the hands of administrators Deloitte, HMV still accounts for one fifth of DVD and music sales in the UK.

According to The Sunday Times, investment company Hilco, which specialises in saving struggling retailers such as Habitat, is the preferred bidder for HMV.

Deloitte has already said it is "actively seeking a purchaser for the business and its assets”.

Should HMV be saved? Let us know what you think in the Comments box below.

via The Sunday Times