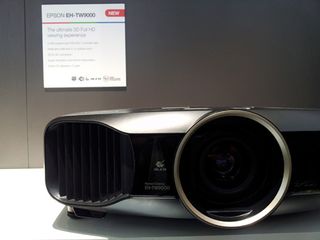 So, here we are – 'we' being myself and features editor Simon Lucas – at the ISE show in Amsterdam.

The great and the good of custom installation have been coming here for many years to show off their latest tech, do deals and generally sing the praises of the high-end integrated home.

Now, with consumer electronics becoming more integrated and convergent than ever before – and with multiroom media systems costing less than ever, too – ISE has acquired a new standing as an important place to see innovations that will have a profound impact on the way we interact with technology in the near future.

And there's certainly plenty to gawp at: Simon has reported on an exciting new projection innovation from Runco: a new projector with the shortest throw ratio in the industry. Mounted either above or below your screen, it sits incredibly close to it, yet can generate a 234cm image. Read Simon's story here.

Runco is far from the only projector manufacturer out in force at ISE. Epson has a huge stand, showing a raft of impressive kit including the brand new EB-Z10000 Series, the first of the company's projectors to achieve a brightness of 10,000 Lumens – which is a hell of a lot of lumens by anyone's reckoning.

There's a lot of innovation here at ISE: one of the most intriguing – and oddest – things we've seen so far is Epson's new 'Moverio' BT-100 multimedia glasses; its first-generation of 'see through mobile viewers'.

Essentially, it's a headset for browsing the web and playing games, except unlike some prototypes of this sort we've seen, you can also see through the viewer, and have a clue what's going on around you. Great for playing games on the train without being caught unaware by that gang of muggers that just boarded? Or even better for pretending you're listening to your better half while secretly keeping an eye on the football results? You decide. On second thoughts, don't.

Lots of companies are here pressing the flesh and celebrating recent successes, from Sonos to Sennheiser. The pro arm of speaker maker Tannoy is here, and with a bit of pushing we managed to get some exciting news out of them regarding developments in their consumer speaker ranges.

Firstly, there is to be a whole new 'Precision' series, that will sit between Tannoy's Revolution and Definition ranges. Secondly, there's to be a new Mercury Series of in-ceiling speakers, too.

Lastly, the company has 'discovered another level of performance' by tweaking its excellent Revolution DC6 T floorstanders – an Award winning pair for us in 2011. So, the new DC6 T 'SE's will be available soon for around £1000.

More on that – with pictures, we hope – and more on ISE, tomorrow.