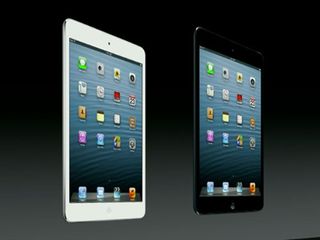 7.13 And that's the end of the show. So... what do you think? Let us know in the comments. A new iPad, new iPad Mini and new MacBook Pro and a new iMac.

7.00 iPad Mini: A5 dual core chip, FaceTime HD camera on front, 5MP camera on the back, LTE and faster WiFi.

6.56 So we have two new iPads. The 4th gen iPad and iPad Mini. All apps and games work on the new iPad Mini.

6.49 Updated the Lighthing connection, support for 4G LTE and Lightning to USB connector, HDMI out. Same price. 16GB for $499.

6.38 There's much talk of the new Fusion Drive. Essentially a flash drive and a hard disk drive working together, with your OS on the flash drive while everything else is saved to the HDD. Got it?

6.32 There's a new iMac, too, which looks rather nice. Very thin (no surprise). Just 5mm at the thinnest point. But again, no optical drive! Won't somebody think of all our discs?! Does nobody put discs in their computers anymore?

6.22 Like optical drives? You're out of luck, the new MacBook Pro doesn't have one. It does have an HDMI connection however! 2560 x 1600 Retina display, too.

6.19 13in MacBook Pro has "way more pixels than an HD TV". Looking forward to finding out how many pixels a 7.85in iPad Mini might have. Any guesses?

5.50pm Ten minutes to go... The new iPads are all expected to have the new Lightning connector, so you'll need the £25 adapter in order to use it with your existing docks.

We'll be covering the Apple launch live and gathering up all the crucial information right here.

We're expecting a new, smaller iPad - iPad Mini - and anything up to 24 new iPad models if reports are to be believed.

Let us know your thoughts in the comments below and we'll post them in to the live blog. The event is expected to kick-off at 6pm and we'll update this post from the top so just press refresh!

While you wait, swot up on all the iPad Mini rumours...