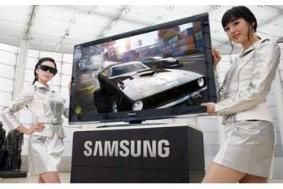 You can check out both LG and Samsung 3D TVs on our stand at this weekend's Bristol Show: we have a pair of 47in LG sets in a dedicated demonstration room, and a 46in Samsung TV out on the main stand. In each case, the sets are fed from forthcoming 3D-capable Blu-ray players.

10m 3D sets in 2011?
And Samsung plans to build on this lead over the next few years, by selling 2m 3D sets in the rest of 2010. What's more it intends to maintain leadership of the market, saying that it could sell as many as 10m 3D TVs next year.

The ambitions of the long-running leader of the global flat-panel TV market look designed to thwart the plans of Panasonic and Sony, both of whom have expressed expectations that 3D would help their TV divisions increase market share and profitablity.

Panasonic expects to sell a million 3D TVs this year, following an April launch, while Sony expects to have TVs available in June, yet sell 2m before the end of the 2010-11 financial year.

Samsung has signed a content deal with DreamWorks Animation to boost its TVs, and has also developed proprietary technology to make the most of the sets consumers buy.

The TVs, which come in 46in and 50in versions, have the company's 3D Hyperial Engine, which adjusts colour and brightness according to the content being shown, and also on-the-fly conversion of 2D content to 3D.

15% of TVs will be 3D
The company says at least 15% of the TVs it makes this year will be 3D-capable, and that it's again planning to increase its market share in the flatscreen arena. Sales plans are to sell 27% more TVs this year than last, a total of 39m units, and for 10m of those to be LED-backlit models, four times more than last year.

Yoon Boo-keun, head of Samsung's visual display division, told a press conference in Seoul he expects 3D to be the new LED; as LED was the technology buzzword last year, this year's will be 3D. "The 3D TV segment will be the main battleground for Samsung this year.

"The outlook is positive after checking consumer responses. Samsung predicts global 3D TV demand will rise by 3.5 million throughout this year," he said.

Commenting on the company's decision to sell its 3D glasses separately, rather than bundle them with sets, Yoon said "The cost of the viewing glasses will vary according to regions and outlets. But we will use the glass price as a marketing tool."

No-glasses 3D 'may be impossible'
But he suggested consumers shouldn't hold their breath waiting for sets able to show 3D content without viewers wearing special glasses: "The resolution of panels must be increased by nine-fold to watch 3D programs without glasses. But TV prices will rapidly soar because more larger-sized panels will be needed."

And he sounded a note of caution that "It might be impossible to experience such programs without glasses. Introducing 3D TV without glasses is currently out of the question."